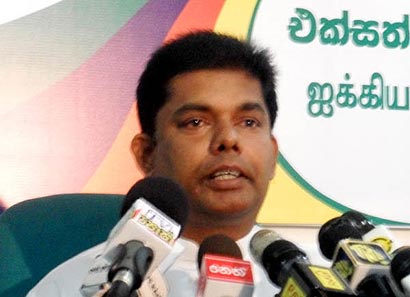 Slamming the government for the fuel price hike, the main opposition UNP said today that institutions including Mihin Lanka and SriLankan Airlines owes the Ceylon Petroleum Corporation (CPC) instead of putting the burden on the people to meet the losses.

Official Spokesman of the UNP and Member of Parliament Gayantha Karunatilleke said that blaming global crude prices is not a valid argument for the price hike as the current price of a barrel is only US$ 121, while the price of a liter is only Rs.85 inclusive of all duties when it reaches the Colombo Port. Therefore he said it is unfair to sell a liter at an exorbitant price of Rs.131.

He said at a news conference today that the CPC had suffered heavy losses due to the un-recovered loans from state institutions and state companies and because of fraudulent deals such as the inferior quality petrol fiasco. He said it is not fair to increase prices to recover these losses instead of taking proper steps to resolve these matters. With regard to the inferior quality petrol drama, the MP said, no action had been taken to bring those who were responsible to book and to recover the losses.