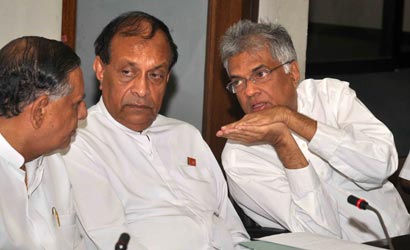 The election of a new UNP leader was a matter that had to be decided on by the Working Committee and parliamentary group, senior MP Joseph Michael Perera said yesterday.

When asked about his views on a letter the Mahanayake Theras of the four chapters had sent to Ranil Wickremesinghe yesterday, asking him to relinquish the UNP leadership but continue as Opposition Leader, Perera said that according to his understanding it would have to be forwarded to the decision making Working Committee which was to meet on December 18.

The UNP constitution clearly stated that in the event of a contest for the post of office bearers a secret vote would have to be taken among the WC and parliamentary group members,Perera said adding that one would expect that procedure to be followed.

A senior UNPer who did not wish to be named said that it was the rebel group led by Sajith Premadasa that had wanted a new constitution enacted and now they were fighting shy of contesting an election by running behind various persons including the Mahanayake Thera’s who unfortunately were interfering in the internal affairs of a political party.

The rebels wanted a poll and it was to be held on Sunday, but they were now resorting to devious methods, he observed.

Meanwhile,the government said on Wednesday that if there was a new Opposition Leader, then the budget debate would have to be changed.

It was the incumbent Opposition Leader who had participated in the party leaders meeting to schedule and programme the ongoing budget debate, Chief Government Whip Dinesh Gunawardena told parliament, adding “It was with his concurrence and agreement that we made this debate programme. This will have to be changed in case there is a new Opposition Leader. The office of Opposition Leader is important and that is why we took measures to increase its financial allocations. Monies allocated to the Office of the Chief Opposition Whip, too have been increased.”