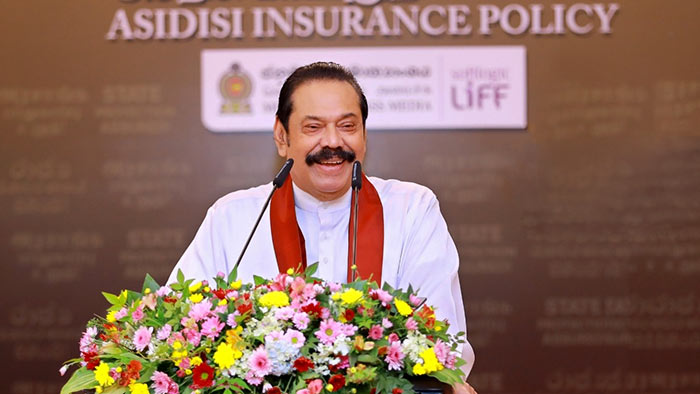 Prime Minister Mahinda Rajapaksa yesterday said that various forces are active to manipulate this country in a way that even journalists do not understand.

The Prime Minister said the government never wanted to hide anything from the media and working with the media is an art. He said journalists were with them during the most difficult times of their lives and that of the country.

He further said that the government is always with journalists and takes every possible measure to protect journalists.

The Prime Minister also pointed out that these evil forces are trying to tarnish the reputation of this country by using what is being shown in the media today.

If the media is going to protect the government, the media will have to be given more insurance,” he said.

At the ceremony insurance policies were presented by the Prime Minister to five insured journalists and the Minister of Mass Media and Information Dullas Alahapperuma and other Ministers also participated in the awarding of title deeds. Arrangements have been made to provide insurance cover to nearly 3,000 journalists through ‘Asidisi Insurance’ and Soflogic Life Insurance, selected under the Government Procurement Process, has come forward.

Addressing the recipients he said that this insurance would have been available earlier.

“We protected journalists whenever there was terror in the media. Sometimes journalists were handcuffed and told we were with them. When political thugs attacked and smashed the camera equipment of the journalists, we took them to the journalists. Richard de Zoysa came to the South during 88/89 and worked with us in the South. Working with the media is an art. If we are a strength to the media, the media will strengthen us. We never hid anything from the media” he noted.

“So are the people. As soon as the headline says development news on TV news, the audience switches to another channel to watch a play. Journalists, media institutions, understand this. The problem is that we do not understand. We have to accept these as very ordinary things. Not only us, but the world today is disturbed by the media. I remember the things that went on social media in the days when the corona pandemic came.

This was is said to be a virus created in a country lab. These propaganda on social media became so powerful that the most powerful countries blamed each other. After that, there was a lot of publicity about the newly discovered vaccine for the coronavirus.” he added.

Speaking on the current efforts to curtail COVID pandemic he said that not only in our country but also in developed countries the youth did not come to get injections. They are facing the world because of the publicity sent on social media.