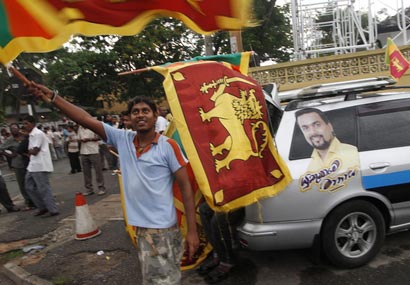 The United Peoples’ Freedom Alliance created history by winning a huge majority close to almost two-thirds in the 14th Parliament of Sri Lanka at the General election held Thursday.

Under the proportional representation system combined with preferential voting and a system of bonus seats for the winner at district level the two-thirds barrier was conceived to be insurmountable by its crafty architect former President J R Jayewardene.

In planting their imprint on the political map of Sri Lanka the people have in the process also relegated the Grand Old Party into oblivion and administered a death blow on the JVP dashing to the ground all its hopes of securing power by hanging on to the coat tail of a retired General.

The results for Kandy and Trincomalee districts have not been released. They will be released only after a re-poll is held by the Elections Commissioner in electorates where counting has been suspended on account of alleged malpractices.