Discussion of selecting the new cabinet is underway 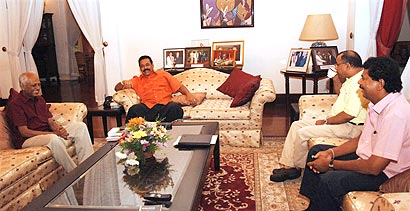 As the people of Sri Lanka have given an overwhelming victory in the General Election –April 2010 for the 7th parliament, the jubilant President Mahinda Rajapaksa has already started consultations with trusted top bureaucrats of his government on selection of the new cabinet.

According to the information received from the President Secretariat, it has taken relevant measures for selecting a suitable team which is vital for early and efficient implementation of the “Mahinda Chinthana Idiri Dekma” the promise of a Bright Future for the people of Sri Lanka.

Meanwhile President Rajapaksa also thanked the voters for the unprecedented mandate given for his UPFA government at the election. He pledged the public to fulfill their aspirations in the near future and also requested everyone to unite with him and the government to make his manifesto a reality.

Home » Discussion of selecting the new cabinet is underway