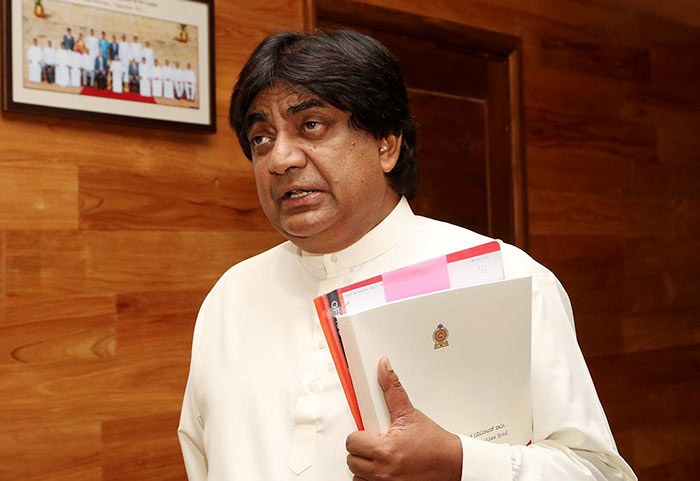 The SLFP/UPFA yesterday ruled out its support for draft constitution that was to be presented to parliament before Independence Day, Feb 04.

The TNA issued the statement in the wake of Orden meeting its leader R. Sampanthan and Sumanthiran in Colombo.

Briefing Orden of political developments in the country, Sampanthan has underscored the importance of the reconstitution of the Constitutional Council through which the independence of the judiciary has been preserved which was clearly demonstrated during the recent crisis situation.

MP Perera alleged that the TNA was making a despicable attempt to cause ethnic tensions. Perera emphasized that the UNP-TNA-JVP-SLMC combine lacked required two-thirds majority in parliament to enact far reaching constitutional reforms.

However, National List MP S.B. Dissanayake admitted that a section of UPFA parliamentary group was exploring ways and means of forging an alliance with UNP leader Ranil Wickremesinghe with a view to securing ministerial portfolios.

Dissanayake alleged that those contemplating to switch their allegiance to Wickremesinghe claimed they represented the SLFP interests.

Responding to a query later, Dissanayake identified the dissidents as those who skipped the vote on a No Confidence Motion (NCM) against Wickremesinghe moved by the Joint Opposition on April 04, 2018 over treasury bond scams.

Dissanayake claimed that the UNP government was in severe crisis due to President Sirisena’s tough stand as regards the restriction of the number of cabinet ministers to 30.

Dissanayake discussed strong opposition even within the UNP, which was reflected by non-cabinet minister Dr. Harsha de Silva, who insisted that those switching allegiance shouldn’t be accommodated in the cabinet.

The UPFA vowed that it wouldn’t allow the UNP spearheaded operation meant to divide the country on ethnic lines to appease those still pursuing separatist agenda.

At the onset of the briefing MP Perera said that the President Sirisena and former President Rajapaksa were going ahead with their plans and were engaged in building up a broad political front against the UNP.

Perera admitted that there were some disruptive elements within their group bent on undermining their efforts.

Dilan Perera pointed out that having moved the Court of Appeal against Mahinda Rajapaksa’s appointment as the Prime Minister on the basis of 122 lawmakers opposition to the Rajapaksa government, only 102 voted for Vote on Account on Dec 21.