US$ 300m world class beach park from Kollupitiya to Dehiwela 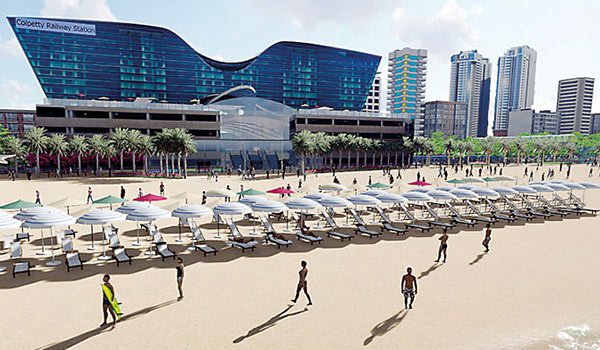 The Government is to invest more than US$300 million (Rs.47.8 billion) to reclaim land for a new beachfront from Kollupitiya to Dehiwela. The Cabinet has given approval for the project, Megapolis and Western Province Development Ministry Secretary Nihal Rupasinghe told the Sunday Times.

Under the ambitious project, some 85 hectares of beach land will be reclaimed through landfill. According to the ministry secretary, the National Aquatic Resources Research and Development Agency (NARA) has been given six months to prepare a feasibility report before the project is started. An Environment Impact Assessment (EIA) study also is underway. The Coast Conservation Department and the Finance Ministry’s National Planning Department have granted approval for the project.

The beach will be developed as a Public Private Partnership (PPP) with an estimated investment for the reclamation work alone costing more than US$ 300 million. “This artificial beach will complement the port city project. This will create a world class beach with numerous leisure activities and is expected to attract thousands of visitors,” Project Director D.E.C.Jayakody said.

According to Rear Admiral Jayakody, the landfill will begin at Kollupitiya with the beach being extended some 80 metres towards the sea. The width will be increased to around 200 metres when it reaches Dehiwela. He said there would be special breakwater systems so that throughout the year the water levels could be controlled and the sea made safe for visitors, particularly sea bathers.

Read Admiral Jayakody said that of the 85 hectares to be developed, around 20 hectares would be for commercial development by the company selected for this project. “We plan to go for a lease agreement of 30-40 years. The developer company can build both commercial and residential buildings on the land allocated to it,” he said.

Among the envisaged attractions of the artificial beach are a world-class aquarium, a sea plane operation unit, water sports and wreck diving to see shipwrecks around the coast. A safe sea bathing area will be demarcated for the visitors.

“The entire area will be able to accommodate up to 50,000 people at any time and will include a park for 3,000 vehicles,” he added.
Once the feasibility study is completed, international bids will be called by January next year to develop the artificial beach. “We hope to have the landfill completed within one and half years,” the Rear Admiral said.