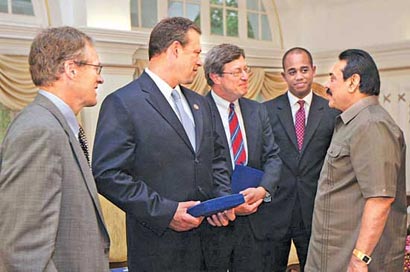 A high level US Congressional delegation yesterday expressed its regret over Sri Lanka being subjected to various unsubstantiated allegations from different quarters, instead of being commended for eradicating one of the most ruthless terrorist outfits in the world.

They expressed these views at a meeting with President Mahinda Rajapaksa at Temple Trees yesterday. The US Congressmen were accompanied by Sri Lankan ambassador to the US and Mexico Jaliya Wickremasuriya.

Leader of the delegation Albert Benjamin Chandler said that he visited Sri Lanka two years before and that the country has made tremendous progress in the field of development during the past two years.

President Mahinda Rajapaksa requested these Congressmen to convey the factual situation of the country to the world. The President gave them a brief account of the development drive being implemented in the country.