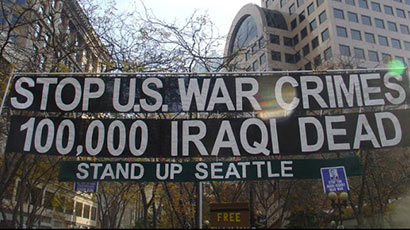 The US claims that it is losing patience with Sri Lanka for its slow progress on ‘accountability’. Within 4 years Sri Lanka has not only eliminated the world’s most ruthless terrorist group (LTTE), but given the people of Sri Lanka a country without bombs, assassinations, suicide bombings and development is taking place exclusively in the North worth $3billion. In a matter of just 4 years Sri Lanka’s achievement outshines and embarrasses the lack of progress by the US/Allies in all of the countries they invaded/occupied and continue to control through their puppet leaders now installed. It is with these facts that we question how far the US is ‘without sin’ to cast any stones against nations given America’s heinous criminal record both past and present. The world does not want or need a Pax Americana imperialism enforced on the world by America.

The hypocrisy of double standards is what we now highlight which fellow nations of the UN and world need to seriously take cognizance of.

Is the U.S. “without sin” – does the US have any moral authority to “cast the first stone”? Hardly!

A country that used napalm, Agent Orange during the Vietnam War, that dropped atomic bombs twice with no qualms about the civilians they were targeting, a country that provided nerve agents to the Syrian rebels the US is openly funding and training to topple the Syrian Government has no right to be telling how countries should be governed. Nerve agents were given by the US to Iraq in the 1980s while US used white phosphorus in Fallujah, Iraq http://www.youtube.com/watch?v=75DsfSOeBSQ

America used Agent Orange in Vietnam and 4.8million Vietnamese died, 400,000 children were born with birth defects and they continue to suffer birth defects and abnormalities and the US has yet to pay compensation for its crimes.

It emerges that even US war veterans are now facing homelessness in the USA!

In the Yugoslavia campaign to create Kosovo and ensure a pro-US/West satellite state was created the war crimes are clearly given with examples – http://www.counterpunch.org/1999/06/15/who-nato-killed/

Bush lied to occupy Iraq, Clinton lied to invade and create an independent Kosovo in 1999. No WMDs in Iraq, No mass graves in Serbia, no ‘ethnic-cleansing’ by Serbian troops as alleged. Even civilians being forced to vacate cities due to evils of Serbian police was also proved false. Civilians did flee but they fled due to NATO aerial bombing that took place every day through 3 weeks. The bombings were specifically targeted at infrastructure to destroy Serbia’s economy. Obama lied to invade and occupy Libya and now the entire Middle East/parts of Africa is in chaos.

According to a report released by the U.N. Environmental Program and the U.N. Commission on Human Settlement across Yugoslavia “81 civilian industrial facilities were attacked and/or destroyed in the bombings by NATO forces.” Among the targets NATO hit were oil refineries, petrochemical plants, chemical fertilizer factories, fuel storage tanks, and power plants. Thousands of tons of explosives were dropped by NATO warplanes on Yugoslavia.  Among those were internationally outlawed cluster bombs, gravity and graphite bombs. According to Dr. Rosalie Bertell – DU can travel in air tens of kilometers from the point of release, or be stirred up in dust and resuspended in air with wind or human movement. It is very small and can be breathed in by anyone: a baby, pregnant woman, the elderly, the sick.

The Atomic Agency Authority in England predicted that if 50 tons of DU dust were released in Iraq, 500,000 would die of cancer. Between 700-900 tons were actually dropped, leading to a seven-fold increase in leukemia and a massive rise in the incidence of certain rare cancers  (11) according to an investigator, Felicity Arbuthnot.

US is preaching to Sri Lanka about law and order while it is holding over 27,000 foreign nationals in secret prisons across the world and some of these prisoners have no access to even lawyers, their families do not know where they are. http://www.informationclearinghouse.info/article19960.htm

US is preaching to Sri Lanka about sexual violence having hardly any cases to show against the Sri Lankan military (hardly 20 cases in over 5 years with over 200 committed by Tamils upon Tamils) http://www.defence.lk/new.asp?fname=Human_Rights_Watch_2013_Sri_Lanka_Sexual_Violence_20130223_05

With this dark past of criminal history behind US and all of its regime change motivated incursions upon nations and continents, does the US have a moral ground to be pointing fingers?

It is a question that the entire UN General Assembly nations needs to seriously ask themselves.

Is the world without peace today primarily due to the conflicts that find their roots to the US and its Allies? Given, this scenario should the nations allow the US to even sponsor Resolutions which are merely to enable US and Allies through the UN to carry out its nefarious campaigns to subjugate nations and people.

If the US manual for regime change in Ukraine forms the basis of the current unrest planted and engineered through groups and individuals sponsored and funded by the US should this not make other nations next wonder when their own nation will become the next target? If so, by agreeing to vote alongside the US in its bogus Resolutions are Member nations of the UN and UNHRC not doing a great injustice to humanity?

These are serious questions that the members voting for US-sponsored Resolutions in the United Nations need to think about and address for all of the world’s conflicts get connected to the arms manufacturing industry and a handful of industries who desire to control the world and make profit denying the people any rights – these rights are slowly being taken away and put under the stewardship of the UN and we all know that the UN is working in connivance with the US and Allies. It is time that the Third World nations arose against the mechanizations at play before they find that the control of their nations are run through the UN using bogus UN country representative panels/teams and offices.

Therefore, domestic matters and internal affairs of nations must never be handed over or outsourced to the UN for it will eventually end up being controlled by a handful of people who are controlling Governments of the US/West and it is through these UN entities that nations are finding themselves slaves of IMF/World Bank loan/interest scams while attempts are afoot to drastically reduce world populations through foul methodology.

Countries need to start waking up and saying they will have no part in the ugly games that the US and Allies are playing.