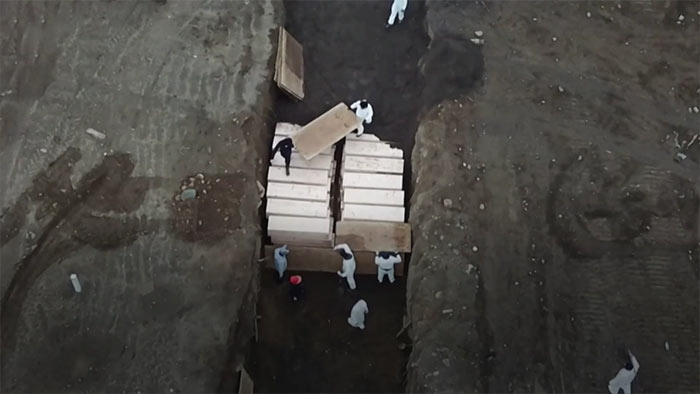 The US has become the first country in the world to record more than 2,000 coronavirus deaths in a single day.

Figures from Johns Hopkins University show 2,108 people died in the past 24 hours while there are now more than half a million confirmed infections.

The US could soon surpass Italy as the country with the most coronavirus deaths worldwide.

But experts on the White House COVID-19 task force say the outbreak is starting to level off across the US.

Dr Deborah Birx said there were good signs the outbreak was stabilising, but cautioned: “As encouraging as they are, we have not reached the peak.”

President Donald Trump also said he expects the US to see a lower death toll than the initial predictions of 100,000 fatalities.

About half of the deaths were recorded in the New York area.

Italy has recorded 18,849 deaths while globally more than 100,000 people have died with the virus.

Researchers had predicted the US death toll would hit its peak on Friday and then gradually start to decline, falling to around 970 people a day by 1 May – the day members of the Trump administration have floated as a possible date to start reopening the economy.

Dr Anthony Fauci, US infectious diseases chief, concurred that the US was “starting to see the levelling off and coming down” of cases and deaths.

But he added that despite the “important advance”, mitigation efforts such as social distancing should not be pulled back yet.

Dr Birx noted that the rate of increase appeared to be stabilising in hard-hit regions like New York, New Jersey and the city of Chicago.

She added that the US mortality rate was “significantly less than many of the other countries, when you correct them for our population”.