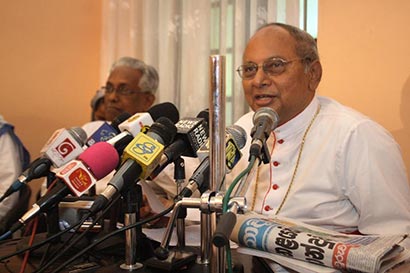 Rev.  Malcolm Cardinal Ranjith of Colombo  says that presenting of a resolution against Sri Lanka by the United States Government at the United Nations Human Right Council (UNHRC) session in Geneva is an undue meddling in the sovereignty and integrity  of Sri Lanka

Rev Fr Cyril Gamini Fernando, Chairman, Current Affairs  Committee of Archdiocese of Colombo issuing a statement said that the US move with the support of certain western countries is also an insult to the intelligence of the people of Sri Lanka.

His Eminence Malcolm Cardinal Ranjith   is of the view that the authoritative reply which we can give  to this unwarranted interference  is to immediately  implement the recommendations of the  Lesson Learnt Reconciliation Commission  report, which are based on the evidence and submission  of the people of our own country.

His Eminence the Cardinal, requests the government to take immediate action to do that, while requesting all Sri Lankan to unite together in this matter leaving behind all differences of race or religion.