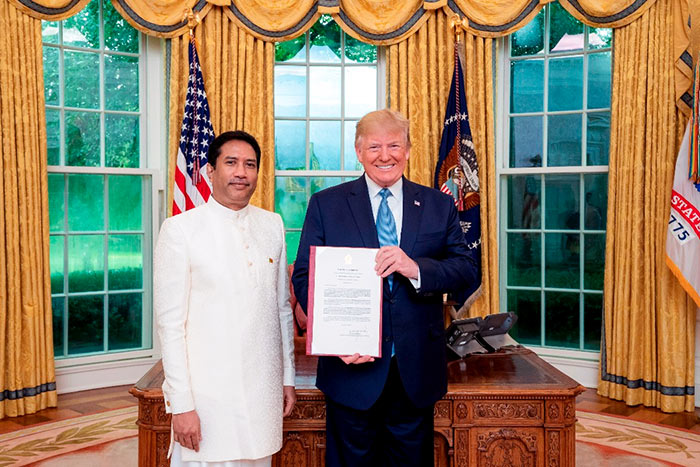 Reiterating that the controversial travel ban imposed on Army Commander Lt. Gen. Shavendra Silva hadn’t been based on independently verified information, but on the much-disputed OISL Report of 2015 and other organizations. Sri Lanka’s Ambassador in Washington Rodney Perera on Thursday, Feb 20, urged the United States to verify the authenticity of its sources of information.

A statement issued from the Sri Lankan mission in Washington quoted Ambassador Perera as having said that the Government of Sri Lanka would remain strongly engaged on this issue with the United States to have it review its decision.

The following is the text of statement issued by Sri Lankan mission in Washington: “Ambassador Perera said imposing a travel ban on Lt. Gen. Shavendra Silva based on allegations, is regrettable and contrary to the principles of natural justice espoused by all responsible members of the international community.

Referring to President Gotabaya Rajapaksa’s vision “to establish an honourable governance that will allow Sri Lanka to maintain its sovereignty, security, national pride, and deal with all nations on equal terms”, Ambassador Perera noted that, “Just as much as the U.S. is proud of the men and women of their armed forces, Sri Lanka is no different. We also have war heroes. Allegations are made against militaries of democratic countries including the U.S. Are actions taken on mere allegations?” He pointed out that “Our war effort did not result in Hollywood movies, but Sri Lanka’s proud security forces completed the task assigned to them by a democratically elected administration and freed us from ruthless terrorism. It is important to differentiate fact; i.e. well-documented terror attacks; from allegations made by those who justified the use of terrorism.”

The Lankan Ambassador explained the strong democratic traditions of Sri Lanka including the utmost respect for democratic ideals; separation of powers; the multi-ethnic and multi-religious nature of the society. He went on to illustrate that the Sri Lankan culture is based on an ancient civilization and that the form of governance the island nation had for thousands of years was drastically changed through colonialism.

Ambassador Perera emphasized the statement by the Minister of Foreign Relations that, “Lt. Gen. Silva was one of the senior military officials who contributed significantly to liberate Sri Lanka from terrorism over a decade ago, and it is disappointing that a foreign government should question the prerogative of a democratically elected President to call upon persons of proven expertise to hold key positions on national security related matters.” The Minister said this action unnecessarily complicates the US-Sri Lanka relationship.

The Ambassador further stressed another key point made by the Government of Sri Lanka that the designation of Lt. Gen. Silva is not based on independently verified information, but on the much disputed OISL Report of 2015 and other, unspecified, organizations. Sri Lanka’s position is that the United States should verify the authenticity of the sources of information. He also reiterated the sentiments of the Prime Minister’s statement on the inclusion of the family members of Lt. Gen. Silva: “Even though we are now in the 21st Century, even members of his family who have not been accused of any wrongdoing, have been subjected to a collective punishment reminiscent of the practice in medieval Europe.” Ambassador Perera concluded that the Government of Sri Lanka will remain strongly engaged on this issue with the United States to have it review its decision.”