Use media freedom in an ethical manner – President 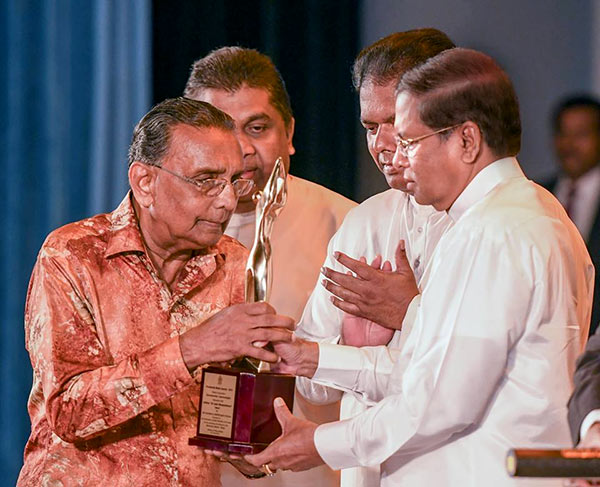 President Maithripala Sirisena, rejoicing the fact that media freedom and democracy have been restored in the country, urged the media to use them in an ethical manner.

He used the platform of Sri Lanka’s first ever ‘Presidential Media Awards 2019’ held at the BMICH yesterday to caution media personnel against scathing criticisms on him stating that the alternative leader who would emerge as a result would be his “opposite” and prone to more drastic measures to control the media.

“For the past four years, there would not have been any politician who had been criticized like me, especially in web-based media. It is easy to criticize me because I have no connections with the underworld or criminals and don’t misuse the Tri-Forces. Though I dealt with the insults and unfounded criticisms against me in a quiet manner, don’t expect that from my successor. The end result of these criticisms will be a far cry from what you expect,” the President said while reminding that this year is an “Election Year”.

The President, observing that there are worst elements than politicians when it comes to corruption and fraud, questioned the media as to why they do not write about them.“The media does not write about them because writing about them will invite trouble for their media organisations,” he added.The President also questioned as to where in the world there is full media freedom. “The state media gets instructions to give priority for state affairs. Private media organizations operate according to the agenda of their owners. Can journalists write independently?” he questioned.

The President also complained that those who read newspaper reports over television and on radio in the morning infuse their own political ideas into them and attack the personalities they want. Recollecting his past experiences, the President said he knows how certain former state leaders rebuked journalists who conduct morning newspaper reading programmes in the electronic media.

“You can criticize the Head of State freely as long as I remain as the President. I received the people’s mandate to restore democracy, and here I see many faces that helped me to win the elections for that mission. You have gained a free media environment, but the question is how ethical you use it,” he remarked.

At the outset of his speech, the President acknowledged that it was Finance Minister Mangala Samaraweera, who pioneered the ‘Presidential Media Awards’ when he was the media minister. He said Samaraweera rendered a great support to make this event to be a success.The President said that he would consider restarting the discussions on the royalty payments. This would be done taking a request made by veteran Artist Lushan Bulathsinhala at this awards ceremony into consideration.

He also reminisced about his days as a freelance journalist at the Associated Newspapers of Ceylon (Lake House) on this occasion.

Home » Use media freedom in an ethical manner – President