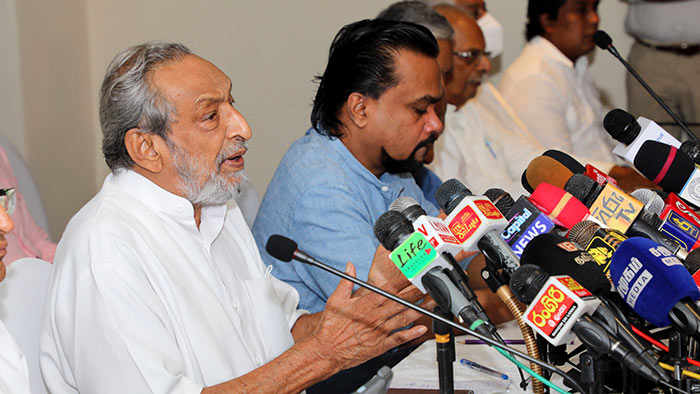 Minister of Water Supply, Vasudeva Nanayakkara, said he will notify President Gotabaya Rajapaksa in writing that he will not attend Cabinet meetings but will carry out his ministerial responsibilities.

He said the Democratic Left Front (DLF) Central Committee (CC) approved his decision not to attend Cabinet meetings but did not approve his decision to withdraw from being a Minister.

Addressing the Media he said a copy of the letter would be sent to the Prime Minister, stating that he will refrain from attending Cabinet meetings until justice is meted out to former ministers Wimal Weerawansa and Udaya Gammanpila.

“While sitting with the Government, we will work as an individual team. We are not going to sit with the Opposition,” he said.

When asked whether they will collaborate with the SLFP, he said it was the SLFP that should take that decision.

He also said despite the Prime Minister’s call for a meeting with the 11 government-allied parties, they were unable to meet him due to various reasons.

“We did not request a meeting with the President. We do not make political decisions based on rumours. There is no issue with the trust of the allied parties and their leaders, including former President Maithripala Sirisena,” he said, adding that they will not accept an invitation from the Samagi Jana Balawegaya or the JVP to join them or engage in any discussions with them.

At a Media briefing on 4 March attended by leaders of government allied parties, Nanayakkara said he would not hold ministerial positions until justice is served for Weerawansa and Gammanpila.