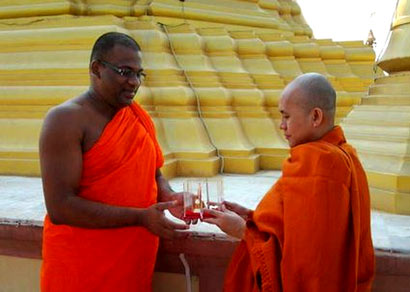 The negative media campaign built against Ven. Ashin Wirathu has had its ripple effect. His message is drowned in a campaign that has projected him as a ‘Buddhist Terrorist’. In a world where 95% of violent conflicts around the world are Muslim together with the realization that behind all these Islamic groups are Western operatives training them funded by a handful of Muslim nations aligned to the West, it is a good time to question who the real enemies of the Muslims are.

Ven. Ashin Wirathu is a Buddhist monk from Myanmar a country that the West eyes in view of its untapped natural resources. The best way that the West knows to capture nations with natural resources they want to hijack is to use ‘humanitarian intervention’ by creating a humanitarian crisis using elements that are in their control – Islamic groups are in the control of the West.

The skeptics and critics before Christening Ven. Ashin Wirathu by various derogatory names must be first aware of the dynamics at play as well as realize that it is well within the rights of the majority of Myanmar as well as the Buddhist sangha that have been a protector of the Buddhist faith to in the absence of political leadership congregate the Buddhist people to realize the dangers at play. For doing that, Ven.Ashin does not deserve to be referred to as a ‘terrorist’ as Time Magazine and Hannah Beecham has and they owe Ven. Wirathu an unconditional apology.

Moreover, statistically, the Buddhists can show how they have lost Buddhist territory to both Christianity and Islam in their quest for imperial expansion which continues unabated and will not lesson so long as they continue indoctrination and conversion funded officially and through government sponsored missionaries.

The Buddhist and Hindu majority nation/people grounded to desiring to preserve their heritage, history, culture and value systems have nothing to defend themselves against this all powerful reality which ordinary Christians and ordinary Muslims are unaware of given that they have little right or opportunity to question their faiths and those that do will face condemnation.

A majority Buddhist nation as Sri Lanka has not seen many Buddhist leaders officially invited, Ven. Wirathu is not on any official Government invitation but he comes at a time when the remaining handful of Buddhist majority nations are besieged by numerous factors. The world response to the grievances of the Buddhists have been simply to ask them to follow Buddha’s teachings of tolerance. In other words, the non-Buddhist world demands that Buddhists simply watch until non-Buddhists do what they like to their nations. That was how Malaysia, Bangladesh, Afghanistan, South Korea and Maldives all lost their Buddhist identity even the historical records have today been expunged.

The Theravada nations have had historical affinity and ties helping each other in times of need.

The needs of the Buddhists of the remaining majority Buddhist and remaining Buddhist countries do not have a political voice. In the absence of such, it is the Buddhist clergy that must lead the way with nobility following the path of Buddha’s teachings and honoring the Dhamma in every way and rekindling the Buddhist virtues among a society enslaved by capitalist mentality that their value systems and good habits have deteriorated to appalling levels.

The difference that critics should understand is that a majority Buddhist nation has accepted all faiths too. The same cannot be said of Abrahamic religions in particular Islam where non-Muslims are even denied citizenship. Can those that do not wish to give demand the same as a right?

It would be good for critics to give an ear to Ven. Wirathu, listen to the grievance of Myanmar especially when most of the Islamic troubles are all funded and its roots lead back to foreign intelligence who have found an easy bait in Muslims and Islam.

The majority populace of any nation have every right to protect its heritage, history, culture and values and not have it diluted by experimental concepts out to change the dynamics of these nations.

Sri Lanka and Myanmar together with the other Theravada Buddhist nations have a proud history they want to preserve and it is their right to preserve that history.