‘Militarization’ in North Sri Lanka – Don’t believe stories. Go and see for yourself 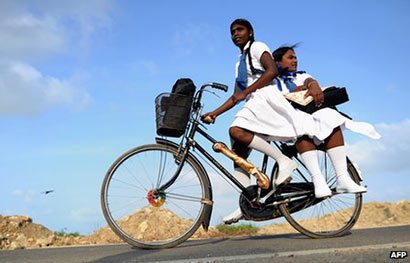 The accusations of ‘militarization’ of North Sri Lanka are many. They come from the same culprits converging to meet the requirement of their funding sources with the ultimate goal of generating enough negative publicity so that the Government is forced to reduce/relocate its military from the strategic posts that it now protects. While, it is within the sovereign rights of a government to station its troops where it likes based on the national security needs of the country, what we need to do is to find out how truthful these allegations are. This will expose the liars. The best way for anyone who wants to know if there is any truth in the allegations of ‘militarization’ is to visit the North and see for themselves.

What people will see in Jaffna:

There are plenty more sites to see and it is worthwhile that visitors to the North see images of what the North looked like immediately after the terror ended as well as photographs of how luxurious the LTTE bunkers were compared to the way the people had to live. It is also good for people to see the office locations of the UN and other international agencies virtually adjoining LTTE offices, give statistics of the scores of agencies that were operational in the North when LTTE ruled a defacto area so that people can begin to question the bonafides of these entities and wonder exactly what they had been doing in the North.

Anyone visiting the North and not visiting the North via the reports compiled by entities funded to carry out a campaign to denigrate the forces, humiliate their presence and create a global scenario that their presence is not wanted will be in for some rude shocks. The people, these are the people living in the North have not shown or said anything to the effect that the Sri Lankan forces are not welcome.

Those that have are a handful of supporters of the TNA, the TNA politicians most of whom are happily living in Colombo but complaining that Sinhalese are coming to the North. How fair is it for Tamils to say that Sinhalese are not welcome in the North when they are buying land, running businesses, sending children to school and not a politician has questioned why minorities can complain of discrimination when they openly say they do not rent or sell to Sinhalese!

How fair is it also for the Tamils to watch silently as the Sri Lankan troops built homes, toilets for Tamils, toiled in the hot sun repairing damaged railway tracks, helping build roads, bridges, renovating kovils and other religious sites and simply allow a handful of TNA politicians carrying a hidden objective to continue the Vellala system of ruling Tamil low-caste/low class as the TULF aspired to do via the ‘boys’ who ended up hijacking the plot and then aligning themselves to geopolitical agendas with time. Should they remain silent or less come out and tell the truth?

How many Tamils honestly and sincerely accept the TNA demands that Sinhalese and Muslims cannot live in the North, when Tamils know that they are regularly streaming into South Sri Lanka and in particular Colombo to purchase land, build houses, send children to school, run businesses and make areas of the South their home?

The ‘militarization’ of the North is nothing but a bogus scare scenario being created and is well within the lies and distortions that the same players have created in other parts of the world.

Therefore, without believing what the reports say, or what people convey through reports sourced from third parties or people living overseas, holding foreign passports and people who have never been to Sri Lanka, it is better to visit the North and see how far the military is influencing or working in partnership with the citizens of Sri Lanka. Visitors should also ask not spokesman for the TNA, officials of the INGOs/NGOs or UN or even anyone working in a paid role but simply ordinary people about what their opinion of the military presence in the North is. Those that do so will be in for some surprises as all those who had been spoken to praised the military, thanked them for their service and many said they even feel safe in their presence. Obviously, these facts are hard for people with agendas to accept but it is worth the effort to visit the North and find out for oneself if there is such an overwhelming military presence as being projected. Whether people like it or not, troops are not stationed to meet the likes or dislikes of people. Troops are stationed for a specific reason and that reason has to do with national security therefore bringing up scenarios of the people not liking the presence of the military has no valid grounds for their removal.