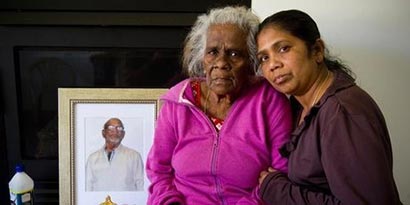 Immigration officials have refused to issue a visa to a Sri Lankan man wanting to attend his father’s funeral because he presented a risk of becoming an illegal immigrant.

The body of Suppiah Mylavaganam, originally from Sri Lanka, has been in the morgue for 24 days as the family put back his funeral so his only son Vamatheva can travel from India, where he currently lives.

But last night Immigration officials said his visa application – and that of daughter Kamalaruby, who lives in Sri Lanka – had been refused because it was believed they were both “at risk of breaching conditions of visas and becoming overstayers”.

A spokesman said it was believed the son was also living in India unlawfully, adding that he and the daughter “do not appear to have genuine reasons to return to Sri Lanka for personal, occupational or financial reasons”.

The family hoped that Mr Mylavaganam’s only son, would be able to fly in for the funeral to perform the customary Hindu last rights.

The funeral home has urged for the funeral be held as soon as possible because Mr Mylavaganam was embalmed to last only two weeks before deteriorating.

The citizens of many countries can get a visa waiver for short stays as they arrive in New Zealand, but Sri Lanka is not among those countries.

The website for the New Delhi office for Immigration New Zealand says visitor visa applications – for stays of up to three months – generally take 15 working days to process for “positive profile applications” and about three months for others.

Mr Mylavaganam lived in West Auckland with his wife, Thankamuthru, and his daughter Nirmala Balaras’ family, including four grandsons. He had 10 children, most of whom live in India or Sri Lanka – but only one son.

“In our culture, the son has to do the final things for his father, and my uncle was the only son,” said a grandson, Theeban Balaras.

Mr Balaras rejected Immigration’s reasons, saying his uncle had completed the minimal registrations necessary for a Sri Lankan to stay in India.

The family were just trying to get on with a funeral. “It’s quite unfair,” he said.

He would appeal to the Immigration Minister to try to overturn the decision, he said.

A body can last for months if it is embalmed specifically for the long period, but most funerals are held within a week.

In Mr Mylavaganam’s case, the family only asked for two weeks to gather family from overseas.

The son’s visa application was rejected last night, while the daughter was refused earlier this month.

An Immigration spokesman decision sympathised with her reasons for wanting to travel to New Zealand and had taken into consideration the humanitarian reasons.

However, she had not provided enough documentation to prove her family and financial ties to her home country.

She had also never travelled abroad so there was no evidence about how she might comply with the conditions of a visa.

The spokesman said humanitarian reasons were considered in applications, but other criteria had to be satisfied as well.

The office would have a full response about the family’s case today once it was signed off by officers in New Delhi, the spokesman said.

Mr Balaras said the family were willing to pay a bond to guarantee that the visiting relatives would not stay in New Zealand beyond the conditions of their visas.

1 Response to Visa process keeps body in mortuary for weeks