New type of Sri Lanka in the making – Kalam 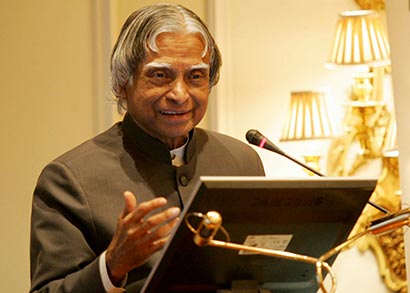 A new type of Sri Lanka is in the making, and a land of unity and prosperity is taking shape, former President of India and renowned Professor of Aerospace Engineering Dr. A P J Abdul Kalam told the media at the Taj Samudra hotel yesterday. He explained that these were some of the main impressions he is taking back to India following his recent visit to Sri Lanka on the invitation of President Mahinda Rajapaksa.

He said that his main task in Sri Lanka was to participate in the launch of the 10-year National Action Plan and declaring of 2012 as the Year of Trilingual Sri Lanka, which is a brain-child of the President.

He said he had extensive interaction with a tight cross-section of the Sri Lankan public including the State in the course of which he exchanged views about the development process and connected matters in Sri Lanka.

The focus of Prof Abdul Kalam’s discussion in the area of development was his ‘PURA’ concept which is being tried out in India and which is an acronym for ‘Provide Urban Amenities to Rural Areas’.

Answering to a question he said that he had suggested to the Sri Lankan President a formula of enabling three days of fishing entirely for Sri Lankan fishermen and three days of fishing entirely for Indian fishermen during the week as a way out of the issues which have arisen in the fisheries sector between India and Sri Lanka. Elaborating on the issue, Prof Kalam said that the fish is nutritious for the people and that fishermen are drawn to the areas where fish flourish most. Citing the case of Iceland, he said that a fisherman in Ice land earns approximately 40,000 USD per month from his livelihood.

He expressed that the Icelandic fishermen store, pack and sell their goods in the high seas itself to buyers and thereby earn a substantial income. He also said that he had discussed the 13th Amendment and connected matters with the Sri Lankan President and that he had suggested that the North and East be empowered constitutionally as an approach to resolving the issues in the area.

He said that youth affairs is one of his favourite areas. He told the youth of Sri Lanka that their intent should be to supremely self-confident and that Sri Lankan youth were just that. Speaking on the question of poverty alleviation, Prof Kalam said that the Sarvodaya methodology needed to be considered by the State and suggested that it works along with the Sarvodaya.

Speaking on the issues with related to the plantation community, Prof Kalam said that trilingualism has the potential to empower this community. Once the language barriers are overcome through the adoption of bilingualism the communities of Sri Lanka could work together towards the national well being,? he noted. He said that the plantation community should be constitutionally empowered to play a significant role in Sri Lanka. Commenting on the advisability of setting up private universities, he said that universities should face competition and that setting up private universities of the type of foreign universities could serve this end. The value of a university is judged by its research and not by teaching alone. ‘The competition in the research field will benefit universities,’ he remarked.

Home » New type of Sri Lanka in the making – Kalam