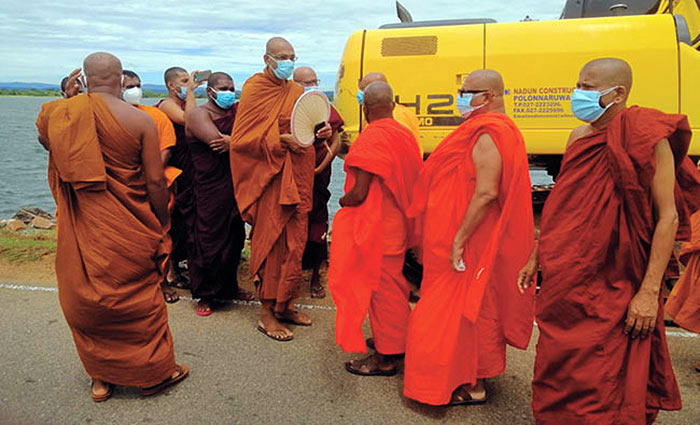 The Maha Sangha on Friday took a stand against the possible destruction of the bund of the historic Parakrama Samudra, endangered by the construction of a new walking path.

Bhikkhus from multiple temples across the Polonnaruwa District made their way to the construction site on Friday (27) morning to witness for themselves the danger to an ancient water conservation system.

Monks representing all three chapters in the District attended the protest demanding the government to suspend the project of constructing a 1.7 km walking path on the bund of the tank.

Adhikarana Sangha Nayake of the North Central Province and Chief Incumbent of the Polonnaruwa Kaduruwela Jayanthi Vihara Ven Kaduruwella Dhammapala thero said the bund of the ancient Parakrama Samudraya was being bulldozed for the construction of this path.

Bulldozers were being used to dump rocks off the bund into the reservoir to construct a new walking path around the ancient water system. This eight-foot wide walkway would extend 1.7 kms. from the Divisional Secretary’s official residence to the D. S. Senanayake memorial at the Number 01 Sluice Gate.

The project proposal came from the Urban Development Authority and construction is estimated to cost Rs. 34 million.

Polonnaruwa Deputy Sanghanayake chief incumbent of Pulasthigama Sri Sakayabimbarama, Ven Yatihalagala Upatissa Thero said that the farmers in the area have pointed out that the construction will inevitably damage the reservoir.

He said that the massive 116,000-acre-feet of water that the reservoir holds, is protected by the bund and area residents point out that during certain seasons with the increase in winds speeds, it stays firm against almost ocean wave-like movements.

Water has become the most vital component for the existence of human beings, animals, and the plantation.

“Even the great King Parakramabahu who ruled the country for 33 years from 1153 AD- 1186 AD asked his countrymen to use water sparingly.

History reveals that King Parakramabahu had made an immense contribution towards the agricultural economy in the country and the Parakrama Samudra was his greatest ever contribution to the people of Sri Lanka,” Ven Upatissa Thero said.

The Bhikkhus dispersed after Polonnaruwa District Secretariat WA Dharamsiri and Irrigation Department officials visited the protesting monks and pledged that they would suspend the project until a further review meeting attended by all stakeholders were held.

(Source: The Island – Text and Pix By Karunaratne Gamage)