WALL OF UDAYAGIRI COLLAPSES WHILE OTHERS LIKE RATNAGIRI PLUNDERED AND NEGLECTED 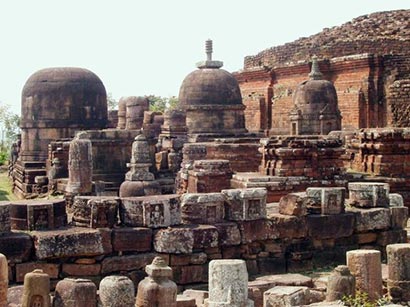 The Times of India has reported  a section of the wall of the 8th century Buddhist monastery at Jajpur’s Udayagiri collapsed recently.

Another national newspaper, the HINDU has blamed the government of India for lack of interest in preserving the Buddhist center for some time and has been complaining of the plunder of artifacts by thieves at this important Center of Vajrayana Buddhism.

The archeological Survey of India has accepted lack of staff at many of these Buddhist archeological sites and has pointed out lack of funds for the neglect.

The Times of India has reported the historical wall collapsed due to getting soaked in the April showers.

. “It is extremely important to prevent the wall from collapsing because it would block the entrance to the monastery,” said Nrusingh Charana Sahoo, a noted historian and researcher.

The wall probably collapsed because of moisture freezing between layers of brick and breaking the bonds between them, Sahoo said.

When the bricks thaw, there is nothing holding them, he added. Manas Ranjan Sahoo, an ASI official in Udayagiri said “We found that the wall has given away at several places. We will repair it soon.”

“ASI is struggling to preserve the archaeological wealth. The monument tells the story of Buddhist civilization and religion,” said Bebaratta Ajaya Das, vice-president of Buddhayan, a cultural organization working for preservation of Buddhist sites.

Udayagiri was a Vajrayana centre between the 8th and 9th century A.D. At Udayagiri, there were remains of several stupas, said a senior official of the Archaeological Survey of India (ASI), adding that one of this is the Dhyani Buddha having descriptions in Vajrayana texts.

“Illegal quarrying near Udayagiri poses a serious threat to the ancient Buddhist monastery. The monument is facing the onslaught of axes and spades of quarry workers as every day many trucks transport the stones, boulders, stone-chips and morums from the hill,” the official added.

A separate Hindu report said, “Udayagiri and Ratnagiri in Orissa were important centres of Buddhist culture in ancient India. But priceless artefacts of that time are being lost thanks to governmental apathy.”

The Hindu quoted Prafulla Mohanti , a man familiar with the area for the last 30 years, “A 1000 and more years ago, these places were epitomes of Buddhist culture in India. Fits and starts of excavation during the past few decades — more in fits than in starts — have unearthed amazing evidence of their importance from the heritage angle. for the world at large, and the Buddhist world in particular. Artefacts ranging in size from gigantic, life-like images of the Buddha to exquisite : “All those hillocks in Ratnagiri, Udayagiri and Lalitgiri were covered with statues. They were full of them; lying under banyan trees, among frolicking monkeys. They were part of our lives. But nobody understood their importance. Then, early in the 1960s, people from the Archaeological Survey of India came to the area and found them lying around. One lady was responsible for taking away the best of the artefacts. Much later, I found some of these statues in the Kolkata museum. Since then, many were sold to foreign antique smugglers by local people. In fact, even I was offered some.” He recalls a beautiful sitting Buddha that is no longer there. “Most of these priceless artefacts disappeared after the 1960s. My estimate is 80%” he rues.

Ratnagiri and its neighbouring Udayagiri could have been the cultural capitals of the entire Buddhist world but for the neglect and apathy of the government and people of Orissa and India. That includes successive governments of both. There are, even today, priceless treasures wilting in the wilderness atop hilltops here; unwept, unhonoured and unsung. Most of these, since their excavation, have been stolen, just taken away or simply neglected.

Miniature rock and metal models and niche carvings, adorn the place even today. Some lie in wasteland, a few find a home in the beautiful but ill-equipped ASI Museum and many more are hopefully safe under Mother Earth. Who takes charge of this heritage that is Orissa and India?

The ASI museum is open to the public from 8:00 a.m. to 5:00 p.m. (entry Rs. 5.). This three-storied structure with four galleries has a staff strength of five: “two permanent and three ad hoc”, as per one of them. There is an elegant-looking Yatri Nivas close by, which is yet to be opened. “It was completed six months ago. The Chief Minister was to inaugurate it a few weeks ago, but bye-elections prevented it. Now it has to wait for the convenience of the CM,” said one of the locals. The officer in charge of the museum is “in dual charge” for a long time, and comes from Konark (160 km away) a couple of times a week.

When I asked the Superintending Archaeologist of ASI for Orissa Dr. AK Patel about the “two permanent, three ad hoc” phenomenon, this is what he had to say: “Yes, we are under-staffed, not only in Orissa but in the entire country. Even in Konark, which is a world heritage site, there are only three permanent watchmen.” As for protection and conservation of the treasures above and below ground, he lamented “The local population is not co-operating. As per the rules, no construction made before 1982 in the protected area can be touched, but anything that came up later can be demolished. We have all the responsibility but no power. We can only request the State government for action, which we have been doing. We have also lodged an FIR about some such constructions, and have written to the Collector. But hardly anything is moving. The local people have even threatened to close the museum.”

I asked Tapaswini Mahapatra, who spent her childhood in Ratnagiri where she was born, about memories of the place as it was three decades ago. She remembers the annual 3-day festival during the New Year (around April 14) held atop the Ratnagiri hillock where 10,000 to 20,000 a speople gathered each day. The festival was connected to the temple on the hillock. Dr. Patel said it has since been “transplanted” to the base of the hillock in the 1990s after ASI discovered Buddhist monuments below its plinth. Tapaswini also remembers a 10-foot high sitting Buddha.

What can be done

Poet-anthropologist Dr. Sitakant Mahapatra, former Secretary, Culture, Government of India and Director-general of ASI, says, “ASI has problems of inadequate personnel and funding. I hope there have been positive changes since my time. They should expeditiously complete the remaining part of excavations in Ratnagiri, Udayagiri and Lalitgiri, which are not far apart. Secondly, whatever they have already excavated in the other two places should be brought to Ratnagiri. An annexe to the existing museum can be earmarked for Udayagiri and Lalitgiri. Later, they can have a museum complex for all three sites in the area. Land is still available there, unlike in Bhubaneswar.”