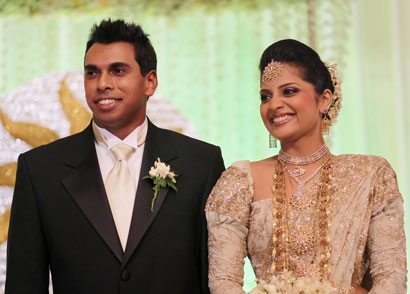 The only child of Defence Secretary Gotabaya Rajapaksa and Mrs Ioma Rajapaksa, Daminda Manoj Rajapaksa entered in to married life today on 30 June. Daminda Rajapaksa’s wedding took place at the Hilton Hotel, Colombo amidst a bevy of high profile guests, including his uncle President Mahinda Rajapaksa.

Daminda Manoj Rajapaksa has born on 16th December, 1982 and studied at Traweek Middle School and then later Covina High School in United States of America. For his higher education Daminda has entered in to Duke University in Durham, North Carolina.

We wish the newly wedded couple a bright future.