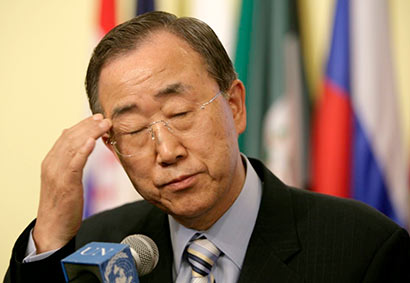 There is little point in pointing fingers at Ban Ki Moon – he is only a figure head reading out scripts prepared for him. An organization that is mandated to secure peace and ensure fair and equal justice we have to question how far the UN and its Secretary General has been both fair and just. Third World together or the super powers of Russia and China must request the UN to end the impunity for US and NATO crimes being committed in every corner of the world overtly and covertly and seek investigations of these crimes. A motion must be brought against the UN Secretary General for the manner he is abusing his mandate.

UN has become an organization that is corrupt, mismanaged and lacks accountability. Its budget is shrouded in secrecy, the performance outcomes of its specialized agencies are vague and one wonders whether there is conflict of interest in every area they branch out its activities! If the world body is accountable to all its member states why is the UN unwilling to go through audits and questions raised by its members? There are over 50,000 employed in the UN and a large number of “consultants” which has become an abused practice. The personnel costs of the UN contribute 70% of the funding it receives and the UN pension scheme is what makes anyone desire to belong to the UN!

For speaking against UN peace keepers trafficking Eastern European women into sexual slavery in Bosnia, Madeleine Rees, was dismissed from her job at the UN office of the High Commission for Human Rights in March 2010. Her stand on the issue of sex slaves resulted in her transfer to Geneva in 2006 to head the UN Women’s Rights and Gender Unit division but she clashed with Navi Pillay the UN High Commissioner for Human rights before she was out of a job with the UN altogether. Her story has even inspired the film – “The Whistleblower” though UN officials claimed her dismissal had nothing to do with her role in Bosnia. There are plenty more scandals that has embarrassed the UN over the years.

Former Secretary General, Boutros Boutros-Ghali is said to have played a key role in supplying weapons (disguised as relief material) to Hutu regime (through a $26million arms deal in 1990) which carried out the Rwanda genocide in 1994 against the Tutsis as disclosed in a book by Linda Melvern. Boutros-Ghalis’ contacts with Hutus were never investigated. Kofi Annans son was involved in the $9billion oil-for-food scandal. Annan is now brokering peace in Syria! Kurt Waldheim a former Secretary General was also a Nazi.

9/11 attackers were not Iraqi, they had no links to Al Qaeda, Iraq did not have WMDs but Iraq was attacked, invaded and occupied. The US was prepared to spend $900billion per year on destruction to secure 115billion barrels of oil reserve while 49m Americans live in poverty and 46million depend on food stamps and 4m are homeless.

The invasion and occupation of Iraq was based on a lie – allegations of weapons of mass destruction. While in Iraq, a Johns Hopkins University study published in the medical journal Lancet in 2004 estimated that 100,000 Iraqi civilians had been killed or died between the invasion in March 2003 and October 2004. Most of victims by coalition forces were children/women. Many of these killings committed by mercenary forces clad in military attire.

Why did the UNSG not appoint a Panel of Experts to brief him on the violations of an illegal invasion and occupation? Why did UNSG not investigate the alarming crimes committed by US and Allied forces upon the Irai civilians?

John Hopkins University study in 1988 estimated that if cancers continued on the current curve 44% of the Iraqi population would develop cancer by 2000 – which proved true. US has since dropped over 3000 tons of depleted uranium with Iraqi future generation likely to be born with birth defects.

New York Times reported in 2003 that US Secretary Rumsfeld personally approved over 50 US airstrikes in Iraq which killed many innocent Iraqi civilians.

Pentagon policy informed to the media was that any strikes that result in 50 or more civilian deaths was “unavoidable collateral damage. That means the US administration is well aware of targets and given its policy it simply excuses all civilian deaths above 50 as “collateral damage“ it is classified information as to whether this policy still continues. By virtue of this authorization the US is committing a crime and that crime is murder?

Use of Nuclear / Chemical Weapons

Changing the rules of engagement and using Depleted Uranium bombs on Iraq towns where no tanks and no armored Iraqi vehicles existed. Repeated policy of shooting everything that moved an order given from our high command and in direct violation of the Geneva Convention.

Investigate US occupation of Afghanistan

Investigate US Acts of Aggression:

USA and NATO have violated a number of international laws.

US together with NATO have committed crimes against humanity and genocide which no countries of the world together have committed. Sadly their atrocities never get Resolutions against them and they continue to hound the world with impunity.

The US-backed India supported Resolution against Sri Lanka is just one such. It showed Sri Lanka their decision had nothing to do with Sri Lanka’s progress post-conflict and that the members that voted for the Resolution cared not that Sri Lanka suffered 30 years of terrorism and thousands of civilians were victims of LTTE suicide bombs and attacks.

Sri Lanka thanks those that voted for Sri Lanka and those that abstained. It showed that at least these members saw the Emperors for who they were.

We have nothing much to say about these Emperors – someday soon their crimes will haunt them and their sins will emerge.

Why is the UN Secretary General not formulating an Action Plan against the HR violations by the West?

The UN General Assembly must make their objections.