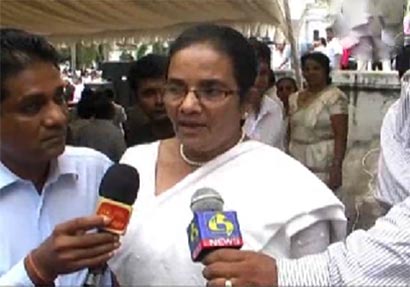 She said the Resolutions should be so voided, as due process on adopting such resolutions had not been followed by the Chair.

Goonethilake also said that she will tender her resignation today from the position of Vice President of the BASL in protest of what she described as the disgraceful manner in which the meeting on Saturday was conducted.

She said “At the outset I reliably learned that we had only around 1600 members present out of 11600 registered members. According to the provisions of the BASL, any decision taken at a special general meeting where less than 25% of the registered members are present, is not valid. The meeting clearly did not have the required 25 per cent.

This objection was raised at the very beginning, but the Chair overruled it”. “When the Resolution was put to debate at the outset the President said that every speaker will be allocated 3 minutes and he or she could only speak once. But people who supported the Resolution were given more than 3 minutes even when they spoke on things which were not relevant to the topic. Others who tried to express differing views were stopped midstream, and silenced”

“I saw Marshall Perera, one of senior most members of the BASL and who had come all the way from Badulla raising his hand on several occasions. But he was not given a chance to speak. I saw three or four people standing near the mike to speak, but they were not allowed to do so. Suddenly the Chair said the resolution was unanimously passed and Wijedasa Rajapaksa went off, Gunatilleke said .

She went on to say that whether the resolution was passed unanimously or by majority vote was not the issue, but whether the meeting was properly conducted.

“People came from far and out, getting up very early. This is not fair by them. The right of expression was not given to many members who wanted to express their views” she added.

Gunatilleke said that this had prompted her to make a decision on resigning as she thought there was no conducive environment to discharge her duty towards the membership in a just and acceptable manner. The BASL Vice President also lamented that BASL today has become mired in politics.

“We never allowed politics to come into BASL., but it is not the case now. Politics has ruined the association. As a senior member I will continue to fight to keep the BASL independent of politics” she added.

Gunatilleke said that she had been with the BASL for a long time and held key positions since 1991 — and also during her 34 years of service at the Bar had acted according to her conscience.

She also said that the Bar was losing respect today among the public, due to the disgraceful conduct of a minority. “I don’t know what is happening today. People are hooting, fighting, shouting and even breaking coconuts within the hallowed premises. We have to stop this degeneration. We need to protect the system, otherwise there want be a profession left for the future generation”, she added.

She added that a small minority had forcibly taken over the Bar for political reasons. Asked whether Wijjedasa Rajapaksa should have stepped down in this situation of crisis and allowed another person to conduct the meeting as he is a partisan UNP MP, she said, ‘Yes, but we all know those correct principles are not followed these days, no.’