Will the ancient sword go back to its rightful place? 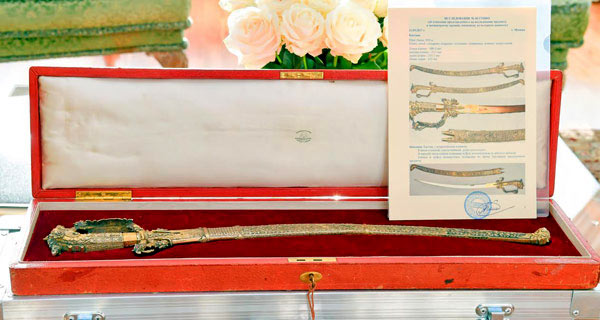 The ancient sword belonging to the Kandyan era presented by the Russian President Vladimir Putin to his Sri Lankan counterpart President Maithripala Sirisena will be handed over to the National Museum, sources said.

President Sirisena received the sword in an official visit to Russia where he held bilateral discussions with the Russian President in Moscow on March 23.

The sword was believed to have been taken to England back in 1906 later been bought by Russia at an auction.

However when contacted, the Department of National Museums Director Dr. Sanuja Kasthuriarachchi said so far she was not informed about such a move and could not estimate the value of the sword without observing it carefully.

Meanwhile, she said that the Kandy Museum which, was closed for over one year for renovations is to be opened on April 3 under the patronage of Minister of Internal Affairs, Wayamba Development and Cultural Affairs S. B. Navinne. It is also believed that the sword might be transferred to the Kandy Museum once it is reopened.

2 Responses to Will the ancient sword go back to its rightful place?

Home » Will the ancient sword go back to its rightful place?