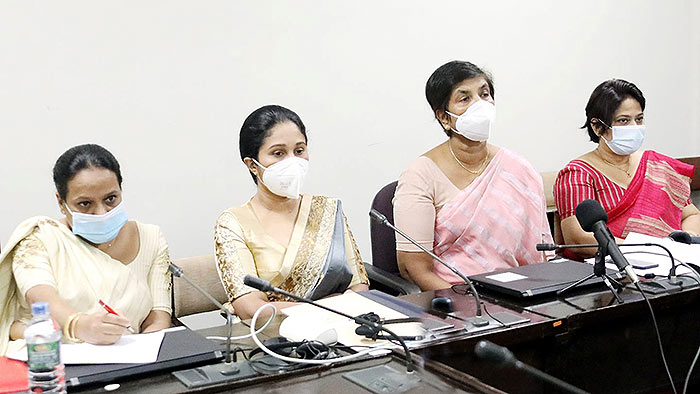 The Women Parliamentarians Caucus stated that they will stand for the rights and job security of Bimshani Jasinarachchi, promoted first Deputy Inspector General of Police in Sri Lanka.

They said political differences will be shed and they will fight for her rights until justice is meted out to her.

Women Parliamentarians Caucus chairperson and Primary   Health Care, Epidemics and COVID-19 Disease Control State Minister Dr. Sudarshini Fernandopulle condemned the challenge in court to the appointment of Bimshani Jasinarachchi, who was the Director of the Police Children’s and Women’s Bureau.

The State Minister was addressing a press conference in the parliament complex yesterday.

The Chairperson pointed out that her caucus was very pleased with the appointment of the female Deputy Inspector General of Police and that it considers the appointment of a woman to a higher post in an institution such as the Sri Lanka Police, where the majority is male, as a contribution to gender equality.

However, while expressing her displeasure over the situation against the DIG, Fernandopulle said she believes that if Sri Lankan women were to be recruited into the police, they should have the right to receive their promotions regularly.

The MPs pointed out that being a woman, it is very unfair to try to lose the opportunity to get higher positions in a certain field.

Deputy Chairperson of the Caucus, State Minister of Skills Development, Vocational Education, Research and Innovation Dr. Seetha Arambepola said, that all women MPs, setting aside political differences, condemned the involvement of certain groups in legal action challenging the post of DIG Bimshani Jasinha Arachchi, and urged all women in this country as well as all parents who wish their daughters success, to unite.

Speaking at the event, Deputy Chairperson of the Caucus MP Rohini Wijeratne, said that it was bad for the males to oppose Bimshani’s promotion.”The harassment of women in this manner is a major obstacle to the progress of the country and action should be taken to stop the physical or mental harassment of women, especially in the workplace”, she said.

The Chairperson further stated that the purpose of the Women Parliamentarians Caucus is to stand for the rights of women in the Legislature. Therefore, the caucus will inform all political parties and encourage them to increase the contribution of women in active politics in the country, she said.