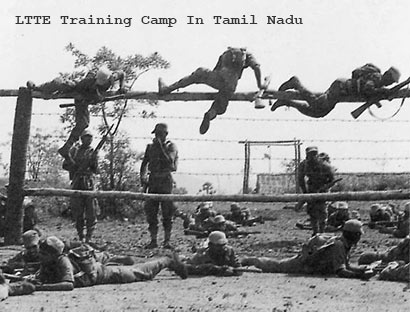 Just as we accept that India is Sri Lanka’s largest trading partner, that we remain grateful to King Ashoka for gifting us the benevolence and compassion associated with Buddhism. All that is true but that does not mean India should plan and train groups from Sri Lanka into militants to destabilize Sri Lanka. The training by former Indian military, the financial assistance given by the Indian Government, the logistics support given by Tamil Nadu to these militant groups makes India an accompli to murder for every act of terror committed by the LTTE over 3 decades. Prabakaran had only a handful of school/college drop outs and Anton Balasingham but it was India that trained them into professional killers. Ironically, the same men that India trained ended up killing Indian soldiers of the IPKF in Sri Lanka.

The civilians killed by IPKF are said to have been caught in “cross fires”. Whether the “civilians” said to have been killed by Sri Lankan army in the final stages of the war has to first determine whether they were actually “civilians” given that the LTTE claimed they were voluntarily helping build bunkers. Participating as combatants in an armed conflict when war has been declared by the enemy forces denies these “civilians” the status of civilian under IHL.

However, the innocent men, women, children and clergy who were outside war zones going about their daily lives and upon whom LTTE planted bombs inside buses, roadsides etc were real civilian victims. They were not inside any conflict zone. LTTE planned and executed their murder. Where is the justice for the thousands of lives lost over 3 decades. Why has the international community not cared for the human rights of these victims? Were their deaths not attributed to the training and supply of weapons provided to the LTTE initially by India? On what basis can the international community insist that Sri Lanka confines an investigation only to the last 3 months of the conflict totally ignoring the victims LTTE bombed to death. Sri Lanka’s constitution on the basis of equality for all (Article 12 (1)) cannot permit such an investigation. These LTTE victims deserve a voice for the brutality of their murders were seen by all.

The oft used excuse to cover India’s folly is that Rajiv Gandhi the former Indian Premier was killed by the LTTE. Prabakaran and Anton Balasingham even publicly requested India to “forgive and forget” the crime many years later. But Rajiv Gandhi was assassinated in 1991. India did not take action against the LTTE. India’s Narasimha Raw Government even filed a special leave petition (SLP) before the Supreme Court seeking to restrain the Jain Commission from going into any aspect dealing with the role of the Liberation Tigers of Tamil Eelam (LTTE) and to exclude the period from 1981 to June 1987 (this period covers India’s training of LTTE and other militants upto the signing of the Indo-Lanka Peace Accord in July 1987). Rao was the foreign minister during this period. The Rao Government even tried to wind up/minimize the Jain Commission’s role (10 Feb 1992 cabinet agenda had to be withdrawn following protests from members of the Cabinet including Arjun Singh). The Government went on to even back a private petition filed by Mushtaq Ahmed, pleading the Commission be wound up citing the same reasons as SLP but was rejected by the Delhi High Court on 16 Nov 1995. http://www.outlookindia.com/article.aspx?200578 How can India cry crocodile tears for Rajiv!

LTTE freely used Tamil Nadu as its second home. We continue to wonder throughout 30 years how many living in Sri Lanka’s North are actually Sri Lankan citizens. The possibility that these are Tamil Nadu Tamils settled in Sri Lanka is nothing that can be overruled.

Let us look at some of the affidavits filed related to the Jain Commission Inquiry: Shri P. Nedumaran in his affidavit as follows :-

When RAW decided to provide the military training, two senior RAW officers Messrs. Samy and Ravi Menon contacted Mr.Chandrahasan, a Sri Lankan Tamil leader who was stationed in Tamil Nadu. He was informed of their plans and was entrusted with the responsibility of recommending the militant groups to the RAW, for training. During October, 1983, Chandrahasan met me and informed about those developments. It was he, who gave the first information on the military training by the RAW. In November, 1983, he again met me with a grievance on the refusal of LTTE to join the training programmes along with other groups. That was immediately conveyed to Mr. Prabhakaran who was then at Madras.

7.8 Kasi Anandan, a Madras based Sri Lankan Tamil who is a member of the Central Committee of the LTTE was examined by the Commission on 10th and 11th September, 1996, In his deposition dated 10th September, 1996:

Anita Pratap, journalist, who deposed before the Commission has also spoken about the LTTE offices in Madras. Deposition dated August 17, 1996:-

As per the enclosure, the total number of trainees of various Sri Lankan Tamil militant organisations in their training camps being conducted in Tamil Nadu was 3179 males and 184 females, totally 3363 cadres. http://ibnlive.in.com/news/recruited-by-raw-trained-by-army-ltte/14462-3-1.html Militant activities of Sri Lankan Tamil Groups in India: http://www.padippakam.com/document/info/info0021.pdf On 07.03.1985, at Mahalingapuram, a few LTTE cadres went to Tamil Information Centre at Mahalingapuram and opened fire against two PLOTE cadres.

On 17.03.1985, a PLOTE cadre was kidnapped by LTTE cadres from the PLOTE camp at Thirumangalakottai between Chinnamanur and Cumbum.

On 09.06.1984, Rajan and few others of TELO resorted to an indefinite fast near Gandhi statue in Madras, protesting against the opprobrious attitude of their leader Sri Sabaratnam.

On 23.04.1986, three LTTE cadres, who got down from a private bus at Madurai, quarreled with a porter and sprayed aerosol on his face, making him swoon.”

On May 10 1984 an American couple, Stanley and Mary Allens, were kidnapped about the same time as George Bush, a former CIA director and the then Vice President of the United States, was visiting New Delhi. Both were working on a development project in Jaffna, were abducted by militants belonging to the EPRLF. They were branded as CIA agents by the EPRLF. In order to release the Allens the EPRLF demanded Rs. 50 million in gold, to be paid to the Tamil Nadu Government, and the release of 20 EPRLF cadres.

The material available to tie India to directly contributing towards the terrorism that prevailed in Sri Lanka are many. Moreover, its own house if falling apart – http://www.youtube.com/watch?v=INSStMLUsSg.

Successive Indian Governments that claim to be interested in only the “integrity and dignity of the Tamil people” squashed all attempts to create a Tamil Homeland in India’s Tamil Nadu and slapped a constitutional amendment denying such. These are factors that often tend to get overlooked. The “ethnic” dimension to the conflict was also created by India because it would allow India to always interfere on the “Tamil” issue.

India, Tamil Diaspora, Tamil politicians in both India and Sri Lanka are all aware that there will never be a homeland given for Tamils in either Tamil Nadu or Sri Lanka. They take part in the calls for a “homeland” because it provides them plenty of means to profit and plenty of Governments/NGOs etc to plug along with the Eelaam call to push their agendas. So everything works to perfection.

Only a Presidential Commission of Inquiry set up by Sri Lanka will be able to unearth the truth and the roots to Sri Lanka’s conflict.

Unless we go back to where all the militancy started, who started and who helped we are purposely omitting a major component in the jigsaw puzzle and completely ignoring a period of history that is very important for the victims who have died because of LTTE and because India trained LTTE and other militant groups.

India must certainly owe an apology for all these deaths.