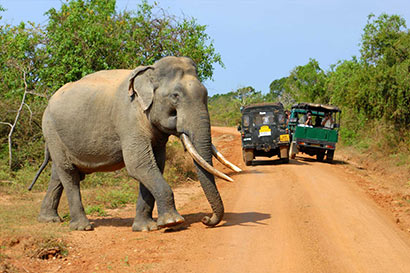 The Yala National Park recorded its highest daily income last Sunday, a Wildlife Conservation Department spokesperson said. She said there were 3,302 visitors to the park on Sunday paving way for a record income of over Rs. 3 million.

The spokesperson said there had been 1,078 foreigners and 2,224 locals among the visitors. She said this was the highest income earned by the Yala National Park since it was opened on February 25, 1938. The spokesperson said the construction of campsites and roads for block 3 would be completed shortly. Yala National Park has an extent of 97,880 hectares.

The spokesperson said the weekend and the school vacation might have led to the unprecedented number of visitors on Sunday.