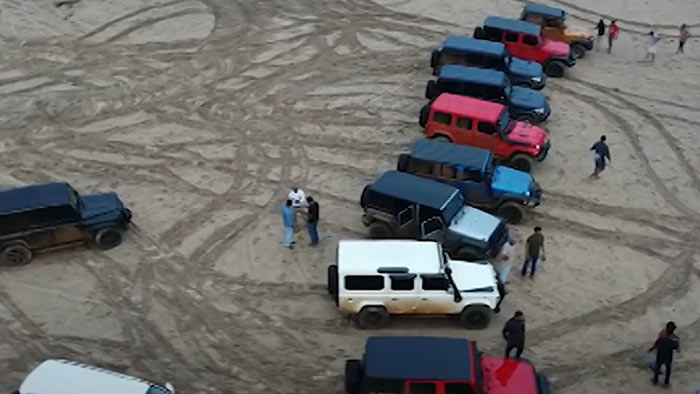 Park officials and 07 safari tour guides who accompanied a group in a fleet of vehicles who operated recklessly inside the Yala National Park and harassed the wildlife, have been interdicted.

Video clips showing a group of people entering the Yala National Park in about 40 vehicles (SUVs) in a way that harms the animals and the environment by violating the rules of the park have gone viral on social media.

According to sources, this incident took place last Saturday (October 22).

Minister of Wildlife and Forest Resources Conservation Mahinda Amaraweera has suspended the park officers and the safari tour guides in question with immediate effect until the conclusion of the investigations into the incident.

On Monday (October 24), the Department of Wildlife vowed legal action against the group of individuals who operated a fleet of vehicles, harming wild animals inside the Yala National Park.

After the incident came to light, Minister Amaraweera instructed the Director General of the Department of Wildlife Conservation Chandana Sooriyabandara to take immediate legal actions regarding those involved in the incident.

UPDATE – 01:34 PM: The Director-General of Wildlife has decided to blacklist the vehicles (SUVs) and those who rode them in a reckless manner inside the Yala National Park.

These individuals will also be barred from entering any wildlife national park in Sri Lanka for three years, the Ministry of Wildlife said.

UPDATE – 07:32 PM: The Tissamaharama Magistrate Tharindu Sameera Silva today ordered the Department of Wildlife Conservation (DWC) to conduct a prompt investigation into the incident and also ordered the arrest of suspects and produced before court.