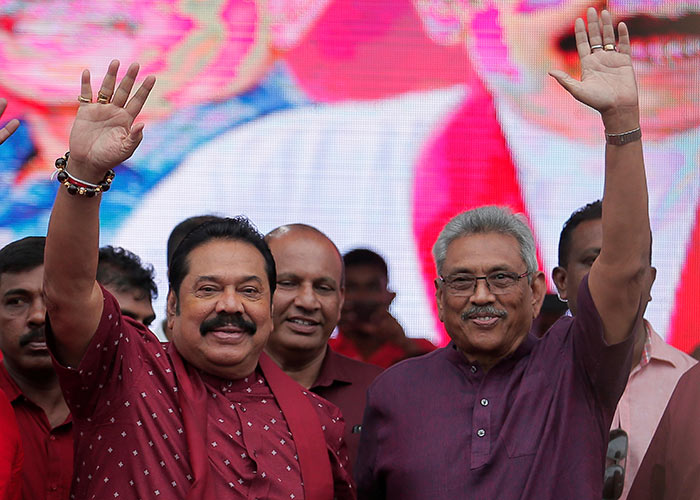 One brother is considered a shoo-in for the job of Sri Lanka’s president in elections this weekend and another is eyeing the prime minister’s post when that election becomes due early next year.

Two other brothers are political strategists for their Sri Lanka Podujana Peramuna party and one of them is considering a shot at becoming the speaker in parliament. Three men of the family’s next generation are also in politics.

The Rajapaksas, best known for the brutal defeat of separatist Tamil rebels and then drawing Sri Lanka into China’s orbit when the West and India shunned the Indian Ocean island, are back at the center of the nation’s deeply divisive politics and it is stoking fear.

While there are no formal opinion polls, former defense secretary Gotabaya Rajapaksa is the hot favorite to win the presidential election this Saturday. His chief opponent Sajith Premadasa, a government minister, is seen to be trailing.

Gotabaya led the operations against the Tamil Tigers when his elder brother Mahinda Rajapaksa was president. Gotabaya has faced lawsuits in Sri Lanka and in the United States over allegations of staged killings of Tamil separatists, critics and journalists during the war.

Both brothers deny the allegations as part of a Western conspiracy to interfere in the island nation of 22 million that sits astride vital shipping lanes and has long been a tinder-box of tensions between the dominant Sinhalese Buddhists and minority ethnic Tamils. In recent months, Sinhalese hardliners have also targeted the tiny Muslim community.

Mahinda lost the 2015 presidential election to a cabinet colleague who turned against him – Maithripala Sirisena. After his ouster, the family’s fortunes fell into decline.

But Easter Sunday bombings on hotels and churches, in which more than 250 people were killed, derailed Sirisena’s presidency, and he has announced he will not contest this year. The attacks, claimed by Islamic State, have rekindled support for the Rajapaksas and their brand of Sinhalese nationalism.

Mahinda is barred from running for president again, and is on the stump for Gotabaya, bringing an affable touch to the campaign against the rather gruff manner of his brother, more known for his military machismo.

Another brother, Basil, handles the party finances and striking deals with rival groups while a fourth brother and former speaker, Chamal, campaigns in the family borough in the south of the island.

Mahinda, who is currently leader of the opposition in parliament, is the obvious choice for prime minister when parliamentary elections are held early next year, said Keheliya Rambukwella, spokesman for the Gotabaya campaign.

Chamal Rajapaksa would be the choice for parliament speaker, a position he has previously held, political experts say. In all, seven members of the family are involved in politics, and some of the others could also end up in parliament.

“We are going to see family rule again, and all the excesses that came up with it the last time,” said Health Minister Rajitha Senarathne, who is opposed to the Rajapaksas. “They will suppress all dissent.”

In a front page editorial, the state-run Sunday Observer said it was “afraid” of a Gotabaya presidency and appealed to voters to make the “right choice.”

“A wrong choice will send the country hurtling toward authoritarianism and iron-fisted rule,” it said.

Gotabaya’s spokesman dismissed warnings of family rule, saying the candidate was quite clear merit will be only consideration for top political jobs.

“When Gotabaya comes to power he will appoint people with qualification to the positions, irrespective of their ties to him,” Rambukwella said.

On the campaign, Gotabaya has been uncompromising about the need to strengthen security, repeatedly raising the circumstances that led to the Easter Sunday attacks.

At a campaign rally in Wellawaye in central Sri Lanka Gotabaya said during his time as defense secretary, he had raised special military and intelligence units to tackle extremism, drug trafficking networks and the underworld. These cells had since been weakened, he said.

“There can be no higher priority than national security,” he said.