All eyes on Murali 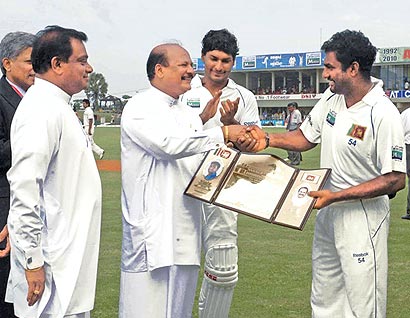 Sri Lanka’s legendary off spinner Muttiah Muralitharan was the cynosure of all eyes as he began his farewell Test match against India at the Galle International Stadium yesterday. As bad weather delayed the start of the match by half an hour, Muralitharan walked into the middle to a rousing welcome with warm congratulations from the Indian and Sri Lankan cricketers.

The 38-year-old veteran spinner was then presented with a special plaque as a token of appreciation by the Central Province Chief Minister Sarath Ekanayake and Sports Minister C. B. Ratnayake.

A specially designed coin was used by the match officials to be tossed with Muralitharan’s face on one side and some of his masterly statistics on the other side.

And fittingly Sri Lankan captain Kumar Sangakkara won the toss and had no hesitation in electing to bat first. As a result Muralitharan will have to wait further to get the ball in his hand to make his presence felt in his farewell test match.

Muralitharan needs just eight wickets in his final test appearance to become the first player to reach the 800 wicket mark. In addition the Galle International Stadium is one of Muralitharan’s favourite venues having captured 103 wickets from 14 tests.

1 Response to All eyes on Murali

Home » All eyes on Murali