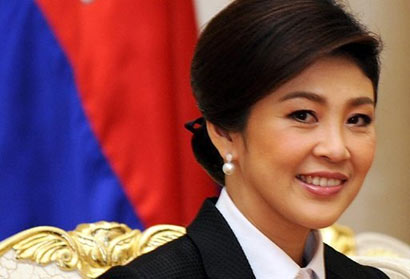 Buddhist Sri Lanka warmly welcomes the arrival of the Prime Minister of Thailand Ms. Yingluck Shinawatra during this Wesak month. The arrival of the Thai Premier will serve to strengthen the pristine links of Theravada Buddhism to which Thailand, Sri Lanka, Myanmar, Laos, Cambodia and Buddhist communities in several other nations of the world belong. Before Ms. Shinawatra illuminates the Sri Lankan Parliament with her presence to deliver her message to Sri Lanka, we wish to convey to the Thai Prime Minister our serious concerns of alarming reports reaching us via the international media of attempts being made by the Organisation of Islamic Co – operation (OIC) to establish an Islamic Jihadist Army comprising Burma’s so-called Rohingyas or Bengali-Muslims and Muslim Mujahedeen volunteers from all over the Islamic world in the so – called Shan State Army (SSA) controlled territory bordering Northern Thailand.

According to these Reports an OIC-SSA agreement sustained by an initial funding of US$ 100 million (being the first installment) from Saudi Arabia and another major OIC country will soon provide OIC’s Islamist Army a firm territory in Burma for its future bases and armed intervention in Burma. It is anticipated that the long porous border between Thailand and Burma will also provide an easy entry for international Muslim volunteers into Burma through Thailand.

It is reported that SSA’s strategic ally KIA already has a nearly 2,000-strong Yakhine army of Bengali-Muslims trained and ready at Laiza to become a nucleus of that OIC’s Islamist Jihadist Army by the Thai border.

Though we have no way of ascertaining the veracity of these reports we are conscious of planned attempts being made in certain international capitals to destabilize and balkanize pre-dominant Buddhist countries by religious extremists funded by oil wealth drawn from middle eastern countries. Recent incidents in Bangladesh, Myanmar, Sri Lanka and even in South Thailand affecting Buddhists provide evidence to harbor grave concern.

The Myanmar impasse is more than about people flooding over a period of time from Bangladesh to Myanmar. These Bengali-Muslims also called Rohingyas are now being funded by Islamic jihadist groups to break up Myanmar on one side while on the other USD100million is being used by Wahhabis in cohorts with the West and the Shan State Army (SSA) and the border of Thailand and Burma is in danger of being subject to a new wave of religious extremism which is likely to be catastrophic to both Buddhist Myanmar and Buddhist Thailand in time to come as well.

We implore the Thai PM to take steps to ensure that:

a) Thai territory is not allowed to be used as a beachhead to separate Myanmar,

b) Thai land is not allowed to be used as a foothold to destabilize Myanmar and incrementally work towards balkanizing the remaining Buddhist countries in South East Asia in order to strike their main target i.e. China, and

c) The Royal Thai Army does not collaborate in one way or the other with Shan State army in creating dissent along the Thai-Burma border (Loi Taileng Base).

These incursions are nothing that can eventually be solved through negotiations but would only end following Kosovo, Sudan style divisions that create greater enmity and chaos as time progresses.

In looking ahead, we appeal to Thailand not to allow a fellow neighbouring Theravada Buddhist nation to fall.

Further, we urge Ms. Yingluck Shinawatra, Thai Prime Minister to join hands with Sri Lanka and other Buddhist nations to establish a ‘League of Buddhist Nations’ that will give a collective voice to the aspirations and concerns of the Buddhist world in the interests of world peace and harmony.