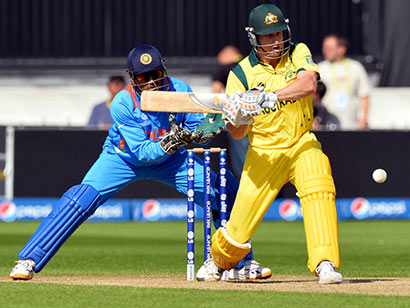 Australia have built a concrete-based artificial ‘slow track’ at its National Cricket Centre to train batsmen to deal with the spin pitches of the subcontinent.

And Australia are even investigating the possibilities of shipping in soil from India in a bid to recreate the slow tracks that are ideal for spin bowlers.

The artificial pitch built in Brisbane has been specially designed to mimic the conditions in India, Pakistan and Sri Lanka, where Australia’s batsmen have so often struggled in the past.

The pitch has a concrete base with artificial grass, clay and turf rolled into a compact layer on top.

“The artificial base and the bounce is a lot different to what we get in Australia,” said Cricket Australia’s high performance manager Pat Howard.

“I think it’s a step in the right direction. Batsmen can practice on a pitch that will play very differently to what we can expect in Australia.

“It’s a start. At no stage am I going to suggest it’s the finished article but I think it will provide a good, solid base to try something different.”

Australia succumbed to a humiliating 4-0 series whitewash in India last year and its batsmen’s failure to deal with spin bowling was widely blamed.

The first players will get a chance to bat and bowl on it this week as Australia prepare for a trip to the United Arab Emirates to take on Pakistan in two Tests, three one-day matches and a Twenty20 starting next month.

Howard said he would continue to investigate the possibility of bringing soil from India to more accurately replicate conditions, even if he had discovered that there was a great deal of variety in the make-up of pitches in South Asia.

“In a further process we have been talking to quarries and doing further testing,” he said.

“We even found out that in Mumbai they have a mixture of clays. It’s very different, as you could imagine, if you go from the bottom of Sri Lanka in Galle all the way up to Mohali.

“It’s a fascinating process and we’re not going to have a magic bullet here.

“I’m happy to keep trying and innovating. I’m sure some things won’t go well, but I’m sure over a period of time we can create something that adds to the growth of players against spin.”