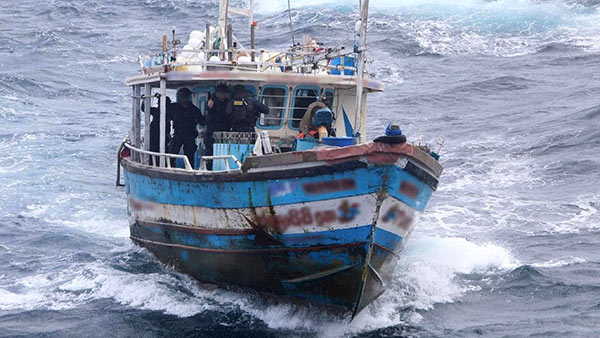 Australian Border Force officials are facing a surge of people-smuggling activity from Sri Lanka, with another fishing boat carrying 13 suspected illegal immigrants ­intercepted west of Christmas ­Island – the sixth attempted venture since May.

The operation, near the Cocos Islands last month, comes ahead of expected plans by the Morrison government to head off a Senate committee report into the controversial Medivac laws due in October by forcing a vote on its repeal bill when parliament resumes for a fortnight next week.

The latest venture was foiled by ABF personnel in the remote ­Indian Ocean waters on August 7, after it left Sri Lanka on July 25 — making it the 12th Sri Lankan vessel stopped from reaching Australian shores since Operation Sovereign Borders began in 2013.

Australian Home Affairs Minister Peter Dutton said there was renewed activity out of Sri Lanka, which he described as “concerning”.

The Australian understands that since May there has been more activity out of Sri Lanka alone than all other countries combined across 2017-18.

The government considers the majority of asylum-seekers from Sri Lanka as economic migrants and not eligible for asylum. This was also Labor’s position when it was last in government and faced a humanitarian and political crisis after relaxing border protection policy.

Following the latest maritime interception, the 13 suspected ­illegal immigrants were returned to Sri Lanka, taking the total number of people returned to the South Asian nation to 204 in six years. The incident was detailed yesterday by the government as it came under pressure over the case of a Sri Lankan family facing deportation this week after they were deemed not to be refugees. The High Court in May dismissed an application to review the cases of Tamil asylum-seekers Priya and Nadesalingam, who along with their two daughters had settled in the central Queensland town of Biloela.

The Senate, which will sit next week, is due for a final vote on the government’s push to repeal the Medivac laws, which Scott Morrison took to the May 18 election.

The government’s repeal bill, aimed at reversing laws handing doctors greater control over refugee medical transfers, passed through the lower house in July and was referred to a Senate committee, which is not due to report until October 18. The laws were pushed through the previous parliament by Labor and the crossbench, despite attempts by the government to prevent it.

Government sources said the repeal bill was a “priority” and it was unlikely to wait for the Senate to report back. The government has the ability to call on debate for a bill at any time.

In July, The Australian revealed that an Australian offshore border patrol unit had intercepted a group of Sri Lankan asylum-seekers trying to reach the mainland by boat. Department of Home ­Affairs officials travelled to Christmas Island to process the illegal arrivals, who arrived following an election warning that the Labor-backed Medivac laws could trigger the resumption of people-smuggling.

The following week, another vessel carrying illegal immigrants to Australia broke down, with the Sri Lankan Navy rescuing all 41 on board and returning them to Galle. On June 28, another boat departed Sri Lanka and was intercepted by the Australian Border Force. Between August 17 and 20, Sri Lankan security officials disrupted another people-smuggling vessel before it made it to sea.

Mr Dutton said the threat out of Sri Lanka was a concern.

“It is the reason Sri Lanka was the first country I visited after the election to make sure we can keep these boats stopped,” he said.

“Labor wants people to believe the threat of new boat arrivals isn’t real. It is. We are dealing with it every day. This makes 38 people off three boats in the last four months alone.”

Anthony Albanese yesterday confirmed he had raised the case of the Biloela Sri Lankan family, who have been moved to Christmas Island, with Mr Morrison.

The Opposition Leader said ­allowing the family to stay in the country would not “undermine Australia’s borders”.

“It would simply be the very reason why there is ministerial discretion in the act, to show compassion, to show that there are specific needs for this family given that their two children have been born here in Australia, aged four and two. That they’ve integrated successfully into the Biloela community; they volunteer in the community,” Mr Albanese said.

“It won’t undermine the government’s migration policies. It will simply say that this is a government that is prepared to listen.”

Ahead of a showdown in the Senate on the Medivac repeal bill, the two Centre Alliance senators are expected to side with Labor and the Greens to block the legislation, meaning the government will rely on the vote of Tasmanian crossbench senator Jacqui Lambie to dismantle the medical transfer laws.

Centre Alliance senator Stirling Griff has accused the government of a beat-up over the medical transfer laws, saying they had not led to a flood of asylum-seekers as the government had suggested. Mr Albanese and opposition home affairs spokeswoman Kristina Keneally have said Labor will not support repeal of the legislation it helped facilitate, claiming it is working as intended by leading to faster transfers to Australia of ill refugees from Nauru and Manus.