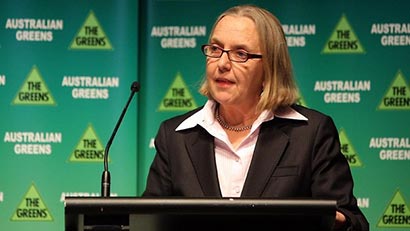 It arouses our curiosity to know what makes the Australian Greens in particular Senator Lee Rhiannon so anxious to move the Australian senate to bring a motion to suspend Sri Lanka from the Commonwealth and to even push for a war crimes tribunal against Sri Lanka? The motion was debated on 22 September 2011 and a second motion brought by the same Senator was defeated on 9 February 2012?

So why does the Australian Green party seem to think the LTTE is the victim and not the villain? Lets imagine the scenario pictured by the Australian Greens. So the Government of Sri Lanka & its armed forces are totally responsible for the carnage in Sri Lanka over 3 decades, the GOSL has been killing thousands of civilians, bombing hospitals, orphanages, terrorizing Tamils …. total carnage by the GOSL, every Tamil is discriminated against, total anarchy. BUT Something is missing. Where were the LTTE all this time, what were they doing?

Australian Greens seem to have left out some simple but important facts. Who killed Alfred Duraiappah the Tamil Mayor of Jaffna & scores of Tamil police officers in the early 1970s so much so Tamils feared joining the police? – The LTTE. Who has killed all the moderate Tamil politicians, academics & intellectuals numbering over 130 respected Tamils, including Sri Lanka’s Tamil Foreign Minister Mr. Lakshman Kadiragamar – the LTTE. Australian Greens if you do not remember, please refer your Governments condolence statements each time the LTTE struck civilians in a history that will give you not only facts but present to you all the gory pictures of mutilations, barbaric murders of innocent civilians, where even student monks were not spared and had their heads chopped to pieces. Who kidnapped young girls & boys from the bosom of their parents and trained them into killers – the LTTE and it is the UN that says so! If there is discrimination of Tamils, why does more than half of the Tamil population choose to live amongst the Sinhalese? How are Tamils owning property, running their own businesses, their children attending public, private & international schools? How are Tamils able to own luxury vehicles and how is it that Tamils own over 200 condominiums in Colombo itself?

Can the Australian Greens please answer above?

Can the Australian Greens supporting the LTTE & its front organizations in Australia care to explain where are these 40,000 dead Tamil bodies of civilians that the armed forces are supposed to have killed & why are Australian politicians & media ignoring the thousands of innocent men, women & children killed by the LTTE. There disfigured & mutilated bodies are available to see in file photos of every gruesome murder carried out by the LTTE. These are examples that lye before Australia – why are they ignoring these facts and prefer to cling on to numbers that have been given to them by LTTE lobbies in Australia which they cannot prove – these are only ghost numbers?

Therefore, Australian Greens – we implore you to stop this nonsense of projecting the LTTE as lily white and when it suits you to conveniently omit reference to the LTTE and merely highlight Tamil civilians.

We don’t need to hire foreign companies to make films on these killings using high tech visuals for every time these gruesome killings occurred the world saw what LTTE was capable of. These killings on civilians number over 10,000 and an equal number have been injured. Maybe the Australian Greens has also forgotten how the LTTE killed Rajiv Gandhi on Indian soil and their explanation years later – “lets forgive & forget”.

So, your “victim” is certainly not the dove that you are presenting to the world by rubbing shoulders with LTTE front organizations that have steadily become “respectable” engines to raise funds for the LTTE. The Australian Green party is doing damage to the image of Australia by continuously associating with these terrorist front organizations for you know & we all know that the only partnership factor between your party & these front organizations is Money & the promise of voting you at every election.

It is rather a sorry state of affairs to use LTTE front organizations as the source of information – the ABC news found that out when it was embarrassed by Sri Lanka’s Defense Ministry which proved in no uncertain terms that the woman portrayed by ABC news to be a victim of the Government of Sri Lanka was none other than a core member of the Tamil Youth Organization, married to another LTTEr and now handling LTTE propaganda located in Australia. Meena Krishnamurthy does not mention the name of a single hospital, nor does she give names of areas which she witnessed the attacks by Government troops and she fails to mention where she saw massacre of civilians by Government troops. Even the name of the orphanage she is supposed to have worked in is not given. These names are not divulged because if she does her string of lies will be revealed!

Of the Australian media channels the ABC news, the Sydney Morning Herald & the Australian Broadcasting Corporation went to town over war crimes charges by a Jeganwaran against Sri Lankan President Rajapakse just prior to his arrival to attend the Commonwealth of Heads Summit. Incidentally Jegatheeswaran was represented by the same Melbourne based lawyers (Robert Stary) that represented the 3 men who pleaded guilty to providing funds worth $1m for the LTTE in 2010. Jeganwaran eventually appeared to have been very much an LTTE operative and an engineering advisor of the Radha Regiment tasked to construct bunkers and safe houses for the LTTE.

Then we come to the Channel 4 documentary screened by the BBC & supposedly nominated for a noble prize. Incidentally, the BBC is facing much controversy. This is the same BBC that had to broadcast an apology to about 74m people for “a news fixing scandal” because BBC broadcasted documentaries made by FBC media, a London based PR company that had been paid to do the documentary. So much for BBC ethics.

So is this the unbiased, ethical media coverage Australia is supposed to be producing? We can only deduce that these LTTE front organizations have penetrated into Australian political, media & NGO circles – it is best that each of their bank accounts be checked. When Amnesty International confirmed it has accepted $50,000 from another LTTE front organization – can we expect unbiased human rights reporting? If these “humanitarian” angels are plagued by falling prey to money we certainly question everyone’s integrity at all levels.

That Senator Lee Rhiannon must be investigated goes without saying. Her blog posted on 27 May 2011 says thus “ standing among the 1000 plus Australian Tamils at Martin Place last week to remember the Tamils massacred in the 2009 war in Sri Lanka, it was very obvious that the trauma for the community is still so deeply devastating”. In the same blog, David Shoebridge’s comment is also given “ “A generation of Tamils have been killed, brutalised and marginalised right under the gaze of the world, including Australia, and those who have been left behind are subject to a brutal military rule … I hope that soon the survivors are respected and remembered by the Australian Government as it belatedly raises its voice for justice for the Tamil people”. Adam Brandt another Greens MP has even objected to the appointment of Admiral Samarasinghe as Sri Lanka’s High Commissioner to Australia.

Lets face reality. Australian’s are none too happy about the asylum situation it is facing. In fact most Australians are disgusted with the arrivals of refugees. The simple logic of Sri Lanka’s boat people is if they are escaping Sri Lanka – why bypass so many countries to go to Australia? Surely the logic should be any country is better than Sri Lanka? Why are these Tamils always trying to dock in Western countries using the sympathy ticket? Why is the Australian Green party in favor of refugees? Is it a coincidence that most of the supporters of the LTTE are also members of the Australian Greens?

We are well aware that Australia has not banned the LTTE despite several attempts to do so. First was by Howards Government in 2005/2006 when NGO lobbies argued that they needed a working arrangement with the LTTE to get funds across to tsunami victims. Even the Rudd Government attempted to ban the LTTE but nothing came of it.

With peace prevailing in Sri Lanka one by one the Tamils who were now allowed to leave the Wanni areas by the LTTE are coming out to give their stories of horror experienced at the hands of the LTTE. From this we can confidently deduce that it is only the foreign living Tamil Diaspora & elitist Tamils that desire to play the “grievance” card and bribe Australian MPs to bring war crimes allegations against the Sri Lankan Government.

What must never be forgotten also is the fact that LTTE openly fought the Sri Lanka Armed Forces. They were in terrorist fatigues and procuring arms from overseas vendors and some of these arms & ammunitions were far more sophisticated and modern than the one’s possessed by the armed forces. What terrorist group in the world has its own air strips and flies planes on suicide missions? Australian Greens need to be reminded these LTTE terrorists were no innocent lambs.

Janes Intelligence is quoted to have declared that the LTTE makes USD300m and its running cost for the Sri Lanka operation is just USD8m which gives the Tamil Diaspora the unit responsible for collecting funds a profits of USD292m. Unless they continue to sell the LTTE resurgence and the “discrimination” card they are unlikely to raise such funds which is done mostly by illegal & illicit means including extortion money from their own people now living abroad. Much of this money is spent towards bribing foreign officials, diplomats, NGOs/INGOs, lawyers etc. Can the UN Human Rights Chief whose childhood hero was Prabakaran be unbiased in her decisions? From every word she has uttered we realize she is more than angyr that her hero has been killed by the Sri Lanka armed forces. So is such a person morally and ethically equipped to give an unbiased decision?

We all abhor violence but Australian Greens must realize that violence began with Prabakaran & the LTTE and there is little point painting the LTTE as peace doves.

Australian Greens if your party is so concerned about the community are you not aware that these LTTE members now in Australia are robbing your own citizens through credit card scams which has cost about 6000 West Australians more than $6.5m from EFTPOS machines?

Every person has every right to express their concerns – but they must do so in the correct way. Has any of these Australian politicians cared to even see the changes that the country is experiencing post-LTTE defeat. Young girls & boys are moving freely, the parents are not scared to send them out of the house for they know that their children will not be kidnapped & turned into killers, even former LTTE child combatants have started to continue their education, one former LTTE female cadre has even fallen in love with a Sri Lankan soldier & recently married, there are former LTTE cadres now doing things they never thought possible, development is taking place, for decades that the LTTE & NGOs/INGOs were moving side by side in the North not a single building, school or health facility was built.  Today, it is a different story & only a visit to the North and to the East will open people’s eyes unless it is already blinded by money & other remunerations given by LTTE front organizations.

As a sovereign country, we are upholding our right to ensure that it remains sovereign & unitary. Similarly, would Australia & in particular Australian Greens like it if suddenly one ethnic group in Australia suddenly turns into liberators and demands a separate state in Australia for its people?