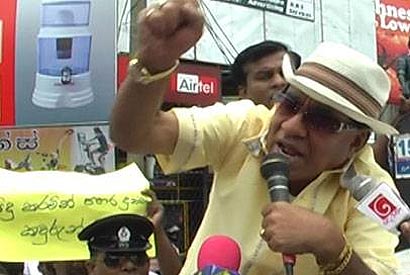 A group of the Buddhist monks from Gampaha are hold a convention to demand the government to appreciate Former Deputy Minister Mervyn Silva’s service and reinstate him as Dept. Minister.

The convention is scheduled to be held tomorrow(20) at the BMICH.

Silva was sacked from his dept. Minister post and his SLFP membership was suspended pending disciplinary inquiry over the incident where he tied a Samurdhi official to a tree for allegedly failing to carry out his duties.