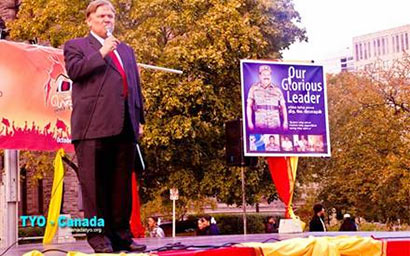 Writing as a member of the general public of Sri Lanka it was sweet news to hear the Canadian government’s political decision not to enforce a ban on 16groups proscribed by Sri Lanka. What a welcome decision delivered by Foreign Affairs Minister John Baird. The only catch was that one of the 16 groups named happened to be the LTTE which Canada proscribed in 2006. Canada’s decision to give legitimacy to the banned 16 groups has more or less invited a stream of Tamil Diaspora to seek membership in these banned entities and flood into Canada. With Canada and Australia both sharing the common headache of illegal immigrants and human smuggling boats we can sit back and watch how Canada will deal with the influx and the complaints from the general Canadian public. All we can say is please take all other LTTE members and those representing LTTE fronts and any others supporting them too. Moreover, since the real Eelam in India has been deferred the option to create an Eelaam in Canada or a greater Eelam encompassing America might be another option for them to consider and it would certainly allow the rest of the Tamils living in Sri Lanka to get on with their lives without being brainwashed into taking arms and staging another onslaught of terror.

Since Canada appears to have forgotten it banned the LTTE let us refresh its memory. Canada’s Conservative Government proscribed the LTTE in 2006 under Canadian anti-terrorist laws. Canada went on to ban the World Tamil Movement in 2008. The ban entitled Canada to arrest anyone providing financial support to the LTTE and jailing him for 10years while those guilty of ‘fundraising’ or ‘facilitating’ work of the LTTE were to face 14 years imprisonment. The ban also aspired to deport LTTE supporters. The then Public Security Minister Stockwell Day even encouraged the Tamil exile/immigrant community in Canada to denounce LTTE activists to state authorities using a special dedicated telephone line. We wonder what happened to this dedicated line just as much as we wonder what Canada proposes to do about the LTTE activists threatening and coercing Tamils into making financial contributions – we wish to remind Canada that these threats are illegal under Canadian criminal law though Canada may wish to ignore these provisions too. Canada may well like to refer the report compiled by Human Rights Watch giving the manner that Tamils are forced to contribute to the LTTE kitty and most of these thugs live in Canada and belong to the very entities that the GOSL has proscribed but who are wining and dining with foreign parliamentarians which makes us to wonder whose side they are on.

It would be extremely interesting to watch and see how these terrorist entities as legitimate Canadian citizens begin to threaten, coerce and swindle the rest of the Canadians (non-Tamils) too. We anticipate too that a time will come when these same operators will swindle Canadian citizens through credit card scams and other nefarious activities which LTTE/LTTE fronts are notorious for and plenty of live examples prevail of their activities which foreign intelligence are far more aware of then us having to tell them.

Canada must also remember that their choice to cuddle the foreign tigers cannot erase the dark terror past of the LTTE which over 30 years unleashed 388 suicide bombers hacking villagers, destroying public property and eliminating innocent people. If nations cannot punish those accountable for these heinous crimes all we can say is that these nations should not pretend to be interested in the human rights of people.

Those that cry foul over the GOSL eliminating the LTTE militarily have conveniently forgotten that 6 attempts were made to negotiate with these killers in talks that took them to all corners of the world to see if the weather would even change their wicked ways. It was after 32 years of terror which did not cease and terror aimed at civilians that finally demanded the GOSL to take action so if anyone were to be accountable it is the public of Sri Lanka who wanted to eliminate the LTTE and we are all happy that we can walk out of our homes without bombs going off or suicide cadres prowling the streets. 21million people had every right to assert their right to life and LTTE which denied people their right to life has no moral right to make demands especially the entities that were operating from abroad spurring and sponsoring LTTE to kill people in Sri Lanka.

No Tamil Homeland, ever in Sri Lanka

None of the recorded history of history that goes back thousands of years mention Tamil people living in Sinhale. Tamils arrived from South India as invaders and held pockets of territory for short periods and returned. They arrived as settlers only towards 11th century AD. At no time did the North function as a separate territory as is being claimed. Thereafter, it was from 17th to 18th centuries that Tamil laborers were brought by colonial rulers to work on the tobacco plantations. These same Tamil Nadu laborers were imported to numerous other nations where British ran colonies and make up the Indian populations in the Caribbean, other Asian and African continent nations. In Sri Lanka, there were more Tamil laborers brought in by the British than those that remained from the Tamils that arrived during the invasion periods. Those unaware of history and using the Indian Tamil laborers to raise issue of ‘stateless’ Indian Tamils have forgotten the Sirima-Shastri Pact of 1964 that gave the option for these Tamils to either return to India or remain in Sri Lanka. What needs to be clearly identified is that the majority of Tamils in Sri Lanka descend from the Tamils that the colonial European rulers brought into Sri Lanka for their own benefit. If the British feel they have done something wrong by these Tamils it is for Britain to compensate them and not Sri Lanka. When Tamil Nadu are continuously referring to the Sri Lankan Tamils as ‘their’ people there is little more that needs to be said. There are no descendants of the Sinhalese in India speaking on behalf of the Sinhalese as their people! Enough historical evidence prevails to show that the Sinhalese civilization was created in Sri Lanka. The Tamil Nation sing song is just a myth and a ruse, it is simply a propaganda theme to fool the international community. A theme foreign elements are using for their own geopolitical agenda to establish bases in the Asian continent.

As for the political group that refers itself as the Tamil National Alliance the group itself was brought to power by the LTTE therefore we have every right to say TNA and LTTE are one and the same. Simply because they have imported an all-his-life Colombo-living former Supreme Court judge to now live in the North and got him elected as its Chief Minister and giving fancy speeches on separatism and speaking on behalf of India, it cannot take away the TNA’s links with LTTE.

What Canada and others need to realize is that there is a huge difference in identifying an LTTE terrorist and a Tamil with no links to terrorism. Therefore, anyone proposing reconciliation projects need to ensure that LTTE terrorists are not included into the equation. The Sri Lankan state has done what no foreign government has done with the terrorists they caught or who surrendered. The GOSL has pardoned 594 child soldiers and put the close to 12,000 surrendered LTTE cadres through a home-grown rehabilitation program and integrated them into society. These former cadres are not languishing in Guantanamo Bay or Diego Garcia. They are today living quite freely. It was the civilian-clad terrorists in the form of Gobi who attempted mischief and was dealt with. Therefore, we continue to question how many of the civilians in the 300,000 that the armed forces saved were actually civilians. With Gobi posing as a civilian we have every right to pose this question for which the Tamils owe the nation an answer.

The fact of the matter remains that the 16 groups declared proscribed by the Sri Lankan Government was done under a UN Resolution incorporating international legal structure. Whether Canada chooses not to implement the ban claiming the groups or individuals named are Canadian citizens it is Canada’s prerogative. If they have been declared holding links to terrorists and if Canada feels that simply because they are Canadian citizens they should not be regarded as terrorists we have no issues. Canada is welcome to keep all terrorist linked people in Canada. Any other country not wishing to cooperate with the ban are also welcome to do so just as they are welcome to take in all these terror entities into their nations and keep them there. They will not be welcomed in Sri Lanka. 30 years of terrorism and suffering makes us reluctant to flirt with terrorists for whatever gains.

Canada has paid and continues to pay a heavy price for its lax refugee claimant policies.

With Sri Lankan armed forces committed to guaranteeing the safety of the Sri Lankan public and our faith in the forces remaining ever strong the same cannot be said of the Canadian authorities with their decision to provide safe haven to the entities Sri Lanka has now proscribed. So long as Sri Lankan authorities keep us safe in Sri Lanka and deny the LTTE or its remnants to raise their terror heads we have no issues about Canada or any other country keeping and courting these tigers simply for personal political gain. In fact we are all the more curious to know the Canadian Parliamentarians courting the Tiger lobbies at the future risk and cost for Canada and Canadians.

Canada should well do to remember that 30 years of terror means that these terror elements whether with arms or not are pathological serial killers and murderers even those who had been linked to them for personal commercial benefit. They all suffer from the same syndrome and this means that they will not hesitate to unleash terror in any part of the world at a future date too and all that would depend on who will handle them at the next stage. So good luck to Canada for the journey it is about to take.

2 Responses to Canada, please give refuge to LTTE/fronts & help create Eelam in Canada