Canada spent $600,000 on MV Sun Sea before deciding to scrap 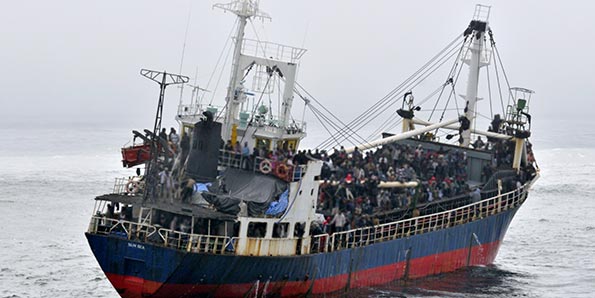 Almost five years after a derelict cargo ship with 492 Sri Lankan migrants arrived off the B.C. coast, prompting a change in Canada’s immigration laws, the government has failed to find a buyer for the vessel.

Now, the MV Sun Sea, on which Ottawa has spent at least $600,000 to store and maintain, is headed for the scrap heap.

“Because a buyer did not come forward, the CBSA will commence a judicial process to obtain the legal authority for its disposal,” Stefanie Wudel, a spokeswoman for the Canada Border Services Agency, the ship’s custodian said.

Just two months ago, CBSA awarded a $157,697 contract to a Victoria company to carry out extensive work to remove potential environmental hazards and ensure the stability of the rusting ship, which is parked at a Fisheries and Oceans dock on the tip of Annacis Island, southeast of Vancouver.

The work included: a “hot water wash” to remove oil and other pollutants from engine-room bilges; repairs to the hull; testing surface paint for lead; and removing from tanks all “deleterious material” or “fluids that could harm the environment.”

There have been no reports of spillage of any pollutants, Ms. Wudel said, nor has any lead over the specified limit been detected.

Representatives of Intercon Marine, which carried out the cleanup, declined to comment.

After the Sun Sea’s arrival in August 2010, the ship spent two years docked at a private shipyard in Nanaimo, before being towed to its current home in the lower arm of the Fraser River. A CBSA official previously told CTV News about $400,000 had been spent on moorage, security and towing during those first two years.

In the summer of 2012, the agency seemed to signal the Sun Sea would be scrapped.

“The Federal Court appointed a sheriff who was tasked with overseeing the sale of the MV Sun Sea. Through the process, the sheriff was unable to find a prospective buyer,” Ms. Wudel said.

She could not say how much the government has spent on the ship.

For the time being, it sits in plain view of people living in a New Westminster subdivision filled with new condo developments. Some residents taking a stroll along the waterfront recently thought it was a bit of an eyesore.