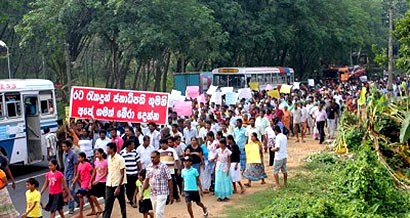 The Hanwella Rubber Products Ltd. Factory is not contaminating the water and polluting the environment, the Central Environmental Authority (CEA) has determined.

Although the villagers in Thunnane, Padukka have charged that the effluents, discharged from the factory, were the cause for the acidity in the well water in the area, chemical laboratory tests conducted by the Central Environmental Authority, have disproved this view. The factory is said to have been discharging the refuse and waste into the environment in a suitable manner. However, if the factory was found wanting in any process, which would cause detrimental effects to the environment, the Central Environmental Authority stated it would not hesitate to take legal action to close down the factory.

“The villagers lodged complaints with us. There were two issues they brought up. One was that there was a low pH value in the water in the vicinity of the factory and area. The other was the fairly high presence of coliform bacteria. We checked, investigated and found that the Hanwella Rubber Products Ltd. Factory wasn’t contributing to this.

They also have received an Environmental Protection Licence since 2001, so they have been running in accordance to the law of the land. We, along with the Board of Investment, Deputy Minister of Investment Promotion Faiszer Musthapha, the District Secretariat and the police briefed the people. They however wanted the factory removed. Why do people behave this way?” Director General Dr. Saranga Alahapperuma said. (Ceylon Today)