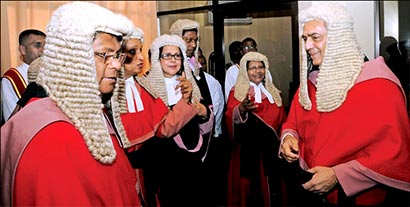 Chief Justice Mohan Peiris PC at the ceremonial sitting inducting him to office yesterday said his doors were open to anyone with a cogent need and he was prepared to listen to them.

“I would endeavour to discharge my duties with the same zeal and energy I endeavoured to as a counsel earlier,” the Chief Justice said. He vowed for a fair dispensation of justice not disregarding the less fortunate.

The Chief Justice highlighted the Bar – Bench cooperation which he identified as “united” for the nation’s wellness.Chief Justice Peiris also solicited the support of the Bar in this regard.

In line with this, the Chief Justice also referred to the relevance given in Hinduism for the purpose of dispensing justice.

Chief Justice Peiris referred with nostalgia to his old schools Royal College and St Joseph’s College which inculcated and nurtured the twin virtues of courage and dynamism in him.

Attorney General Palitha Fernando said: ” As the head of the apex court and head of the judiciary on assuming duties we pledge our unstinted support in the discharge of the onerous duties cast upon the high office.

“Members of both the official and unofficial Bar, fortify themselves with the optimistic hope that the independence of the judiciary and the rule of law would be upheld to the optimum degree during the tenure of the new Chief Justice.

” I express my sincere hope and unwavering confidence that during your tenure of office your lordship with your wealth of experience behind you, will strive to do the maximum towards achieving those objectives. I have no doubt that the new Chief Justice’s experience and exposure in the field of law would serve to enrich the legal literature through judgements.”

He recalled the Chief Justice’s tenure as the Attorney General after having served both the official and unofficial Bar for nearly four decades.

“Apart from that, the Chief Justice represented the country at several bilateral and multilateral talks . Furthermore, the Chief Justice contributed to legal education. He has served as an examiner and also as chairman of the Board of Examiners of the Council of Legal Education in addition to being a visiting lecturer at the Colombo University Faculty of Law,” Fernando said.

He also referred to the new Chief Justice’s skills as an orator and his winning a gold medal as a student of Royal College.

The Supreme Court on which the ultimate destiny of all litigants depend, is the last resort to all who seek justice, he said.

Senior Attorney at Law Razeek Zarook PC on behalf of the Bar said the event represents a great expression for both the public and the Bar.

He recalled that the new Chief Justice discharged his duties at many international forums commendably.

Zarook called for the faith reposed in the judiciary to be preserved and also the system.