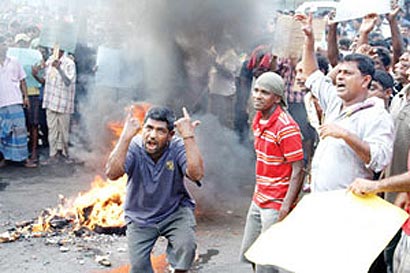 Those running the country’s premier vegetable and fruit wholesale market in the Pettah yesterday launched a massive protest opposite the Fort Railway Station demanding that the government reverse its controversial decision to make mandatory the use of plastic crates for the transport and storage of several types of perishable items.

Traders blocked traffic for several hours in spite of heavy police presence at the scene. H. L. Chandraratne said that they had suspended the protest after the government initiated talks with the representatives of those protesting against the move.

Farmers and traders launched protests in the provinces, including the towns of Hambantota, Dambulla and Tambuttegama, disrupting supplies to Colombo and other major collection and distribution centres. Protesters blocked roads and disrupted traffic for long periods as the police acted with restraint.

Addressing the media in Colombo, Cooperatives and Internal Trade Minister Johnston Fernando vowed that the government wouldn’t give into those protesting troublemakers. Rejecting allegations that his ministry had acted hastily in introducing the law, Minister Fernnado said that farmers and those engaged in the transport of perishable items were given adequate time to obtain plastic crates.

The Kurunegala District MP said that those unable to procure plastic crates were given an opportunity to obtain the required number of crates on an easy payment scheme. Responding to a query by The Island, the minister said that Landmaster tractors and three wheelers would be allowed to carry perishable items without plastic crates. An irate Fernando emphasized that the decision had been taken by the government, though a section of the media and those striking traders accused him of taking unilateral action.

Political sources told The Island that the problem had to be resolved before further deterioration of the situation. Nothing could be as bad as breaking of the supply line ahead of the forthcoming festive season, sources said. Asked whether the government was concerned about political implications, sources recalled how the JVP and the UNP had exploited unilateral action on the part of the government to include the apparel sector in the hotly disputed private sector pension scheme last June. The ongoing protest campaign, too, could become a rallying point for the Opposition, sources said.

Government sources said that law enforcement officers had been advised to act with extreme caution during protests to ensure there wouldn’t be Katunayake-type chaotic situation.

Sources said that with the sharp drop in the supply of fruits and vegetables, prices of those items shot up in Colombo and its suburbs. The failure to restore the supply within the next day or two could dry up the market, sources said, warning it could cause a catastrophic situation at both ends.