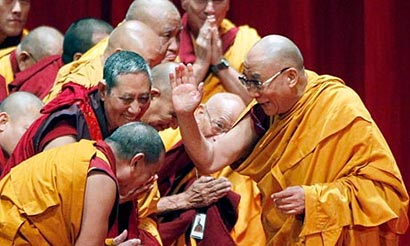 The Dalai Lama has told London’s Sunday Telegraph newspaper that he fears Chinese agents  are training Tibetan women with poisoned hair and scarf to kill him in the guise of seeking blessings from him.

From inside Tibet the exiled spiritual leader had been passed reports warning about the plot he has told the Sunday newspaper.

“The 76-year-old Nobel laureate said he now lives in a high security cordon in his temple palace grounds in Dharamsala, in the Himalayan foothills, on the advice of Indian security officials.

His aides had not been able to confirm the reports, but had recommended his need for high security, the Dalai Lama said.

“We received some sort of information from Tibet,” he said. “Some Chinese agents training some Tibetans, especially women, you see, using poison – the hair poisoned, and the scarf poisoned – they were supposed to seek blessing from me, and my hand touch.”

Despite being one of the world’s most widely revered spiritual leaders he has enemies in China and among some Buddhist sects.

The relationship between China and the Tibetan government-in-exile in India remains poor and mutual suspicion is high following more than 30 self-immolations in the last year by Tibetans in protest against Chinese moves to marginalise their language and culture.

The Dalai Lama said suspicion of Chinese interference in the search for his reincarnation after his death meant he could be the last Dalai Lama. A number of young Buddhist monks, including the Karmapa Lama, could emerge as the spiritual leader of Tibetan Buddhism, he told the paper.

He added that he believed China would change its hardline stance within his lifetime and adopt democratic reforms to safeguard Tibet’s economic growth.

He said the Chinese should use Buddhist logic to overcome their anger, but admitted he sometimes struggled to control his own temper.

He said: “Advisers, secretaries, other people around me, when they make some little, little mistake, then sometimes I burst. Oh yes! Anger and shout! Oh! And some harsh words. But that remains a few minutes, then finished.”

Although he sometimes regretted such behaviour, he believed it was occasionally good for “correction”, he said.”