Immediately following the end of World War 2 the Allied Troops carried out a policy of Denazification. The objective was to totally eliminate any ideology associated with Nazism and to ensure Germany would never destroy European peace. Denazification of Germany began in 1946 and ended only in 1958. US, UK, France and Russia occupied Germany for 13 years. Sri Lanka has finally banned 15 LTTE fronts and the LTTE under UN Security Council Resolution 1373. That decision unfortunately, came after 5 years of LTTE defeat. The GOSL must now annihilate the separatist ‘eelam’ ideology and take action against any political party, organization or individual attempting to separate or divide Sri Lanka. With a growing number of Tamils coming out against the LTTE and LTTE fronts now that the GOSL has banned them, it would be good for the decision makers to take steps to eliminate the eelam ideology and separatist sentiment officially and legally.

When the war began in the late 1930s, the world’s population was approximately 2 billion. In less than a decade, the war between the Axis and the Allied powers had resulted in 80 million deaths — killing off about 4 percent of the whole world.  War crimes trials took place in Europe and Asia, leading to many executions and prison sentences. Millions of Germans and Japanese were forcibly expelled from territories they called home. Allied occupations and United Nations decisions led to many long-lasting problems Germany would face, including the tensions that created East and West Germany.

Denazification of Germany by Allies

The Allied leaders at the Yalta Conference and the Potsdam Agreement in August 1945 agreed to remove all traces of Nazism in Germany. The Allies created a list of 178,000 suspected Nazis who were put under “mandatory arrest,” The 4 Allies (US, UK, France, Russia) divided Germany into zones and each followed their own denazification process. Germans were divided into categories – Major Offenders; Offenders; Lesser Offenders; Followers; and Persons Exonerated. Germany paid reparations to the United Kingdom, France, and the Soviet Union, mainly in the form of dismantled factories, forced labour, and coal.

U.S. policy in post-war Germany from April 1945 until July 1947 had been that no help should be given to the Germans in rebuilding their nation, save for the minimum required to mitigate starvation. In July 1947, President Truman rescinded on “national security grounds” the directive that had ordered the U.S. occupation forces to “take no steps looking toward the economic rehabilitation of Germany.” After the German surrender, the International Red Cross was prohibited from providing aid such as food or visiting POW camps for Germans inside Germany. By early 1947, the Allies held 90,000 Nazis in detention; another 1,900,000 were forbidden to work as anything but manual labourers.  The Information Control Division of the US Army had by July 1946 taken control of 37 German newspapers, six radio stations, 314 theaters, 642 cinemas, 101 magazines, 237 book publishers, and 7,384 book dealers and printers. On May 13, 1946 the Allied Control Council issued a directive for the confiscation of all media that could contribute to Nazism or militarism – over 30,000 book titles, ranging from school textbooks to poetry, which were then banned. All copies of books on the list were confiscated and destroyed; the possession of a book on the list was made a punishable offense. All the millions of copies of these books were to be confiscated and destroyed. Allied Control Authority Order No. 4, “No. 4 – Confiscation of Literature and Material of a Nazi and Militarist Nature”. All confiscated literature was reduced to pulp instead of burning. It was also directed by Directive No. 30, “Liquidation of German Military and Nazi Memorials and Museums.” An exception was made for tombstones “erected at the places where members of regular formations died on the field of battle.”

The Allied costs for occupation were charged to the German people. Thus, Allied ran a poster campaign  “These atrocities: Your Guilt!!” “You are Guilty of this”. 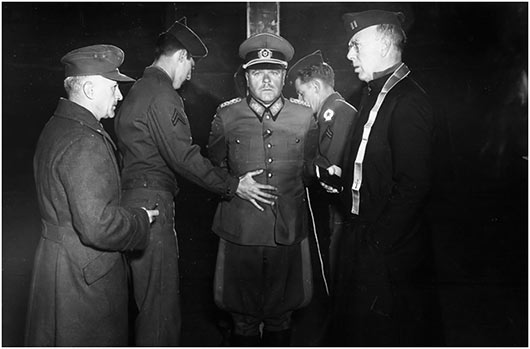 German Wehrmacht General Anton Dostler is tied to a stake before his execution by a firing squad in a stockade in Aversa, Italy, on December 1, 1945. The General, Commander of the 75th Army Corps, was sentenced to death by an United States Military Commission in Rome for having ordered the shooting of 15 unarmed American prisoners of war, in La Spezia, Italy, on March 26, 1944. (AP Photo) 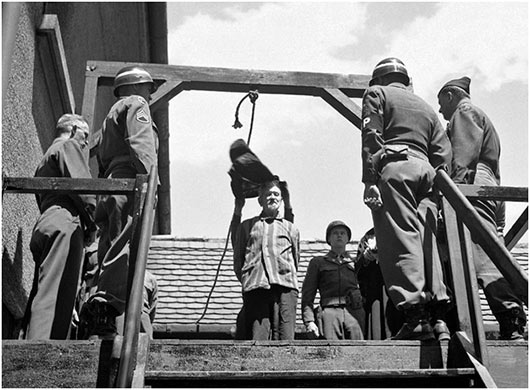 U.S. military authorities prepare to hang Dr. Klaus Karl Schilling, 74, at Landsberg, Germany, on May 28, 1946. In a Dachau war crimes trial he was convicted of using 1,200 concentration camp prisoners for malaria experimentation. Thirty died directly from the inoculations and 300 to 400 died later from complications of the disease. His experiments, all with unwilling subjects, began in 1942.(AP Photo/Robert Clover)

Denazification was a term coined by the Pentagon in 1943. Allies decided Germany and Austria should never be allowed to destroy European peace. Allies aimed to prevent the resurgence of a powerful and aggressive Germany.

Thus the Allies established the Nuremberg Trials – a military tribunal began in November 1945. 12 of the accused were sentenced to death, 7 received prison sentences and 3 were acquitted.

“In 1945 there was an Allied consensus—which no longer exists—on the doctrine of collective guilt, that all Germans shared the blame not only for the war but for Nazi atrocities as well.”http://www.time.com/time/magazine/article/0,9171,844961-1,00.html

How is the denazification of Germany relevant to the terrorism that prevailed in Sri Lanka throughout 30 years?

Separatist mentality needs to be legislatively and legally annihilated and is a prerequisite for any reconciliation.

The GOSL must defeat the Eelam ideology and take action against Tamil political parties associated with Eelam quest. Even though the LTTE as a fighting force is no more, there are remnants disguising themselves as ‘civilians’ and unless the concept of Eelam is removed there is always a question of the same separatist ideology emerging given the dangers of a Greater Eelam co-joined to Tamil Nadu with blessings of the West. The Eelam strategists remain hidden but with the banning of LTTE-fronts by the GOSL drawing upon the UNSC 1373 provides an opportunity to expose these foreign passport holders living comfortably in the West but getting the ordinary Tamils to take up arms.

What the GOSL failed to do immediately after the end of the conflict and when calls for reconciliation emerged was to say that unless the eelam ideology and denazification of the LTTE was dismantled (just as the Allies did to Germany) no integration or reconciliation can realistically take place. If people’s minds continue to be spurred by people claiming that separation of Sri Lanka was possible and Tamils continued to believe and hope for such, wouldn’t the efforts made by the GOSL and the non-Tamils in Sri Lanka turn into a joke? Germany is where it is today because the Allies totally annihilated Hitler and his ideology. Japan is where it is today because Japan too experienced the same.

If Sri Lanka’s Constitution clearly establishes that no party or individual can advocate separatism why is the GOSL tolerating the TNA and associated parties shaking hands with each other and inviting them for tea? This is no time to be playing politics.

The GOSL does not need to be repeatedly told that the TNA is a major obstacle to peace and is a major contributor to dividing the Tamil people themselves. There is a growing number of Tamils that do not align to TNA policies as evident in its manifestos, speeches given by its MPs abroad, statements issued over the years and the manner it canvasses on behalf of the LTTE at political levels among foreign parliamentarians. When the GOSL the elected body does nothing against these actions using their actions for political leverage in Sri Lanka the dangers of exposing Sri Lanka to mischief by foreign agenda hangs over us. Let us not forget that the LTTE prevailed through decades primarily because the previous Governments did not show leadership and preferred to use terror as a means to remain in power. Let this Government not repeat that mistake.

The message that needs to be carried clearly is that no Sri Lankan – no political party – no organization or individual can advocate any type of separatism is Sri Lanka and the legal consequences must be clearly communicated to the masses.

Sri Lanka’s denazification process needs to include the following

Accepting the LTTE’s leadership as the national leadership of ‘Tamil Eelam’ Tamils and the Liberation Tigers as the sole and authentic representative of the Tamil people, let us devote our full cooperation for the ideals of the Liberation Tigers’ struggle with honesty and steadfastness. Let us endeavour determinedly, collectively as one group, one nation, one country, transcending race and religious differences, under the leadership of the LTTE, for a life of liberty, honour and justice for the Tamil people.”

* Report by EU Election Observation Mission Chief John Cushnahan released on 17 June 2004 “Firstly, the LTTE intended that no other rival Tamil party (or Tamil candidate from the mainstream political alliances) to the TNA would be able to claim to represent Tamil interests. A chilling message to this effect was sent early in the campaign when a UNP candidate and an EPDP activist were murdered. Incidents such as this seriously restricted the right of the parties other than the TNA to campaign freely in the Northern and Eastern Districts. During the 2004 elections, the major incidences of violence was perpetrated by the LTTE, whereas at the earlier elections, the primary source of the violence (although not all), were the two largest political parties.

(1) preventing and suppressing the financing of terrorist acts;
(2) criminalizing terrorist funding (direct and indirect);
(3) freezing assets of terrorists and any participants or accomplices;
(4) prohibiting citizens from financially aiding terrorists.

Section 2 demands even more active participation of all Member States .

Section 2(a) implores them to abstain from “any form of support, active or passive” which would benefit a terrorist or affiliated organization, including “by suppressing recruitment of members of terrorist groups and eliminating the supply of weapons to terrorists.”

Subsection (b) invoked a vague duty to take “necessary steps to prevent the commission of terrorist acts.”

Other subsections required states to deny safe haven to terrorists, prevent them from launching attacks against other states, and make sure that they are “brought to justice.” While these obligations impliedly expect Member States to act, they do not explicitly necessitate a domestic legal transformation.

The Resolution was meant to bring terrorists to justice. Additionally the Resolution implores States to ensure that ‘such terrorist acts are established as serious criminal offences in domestic laws and regulations”. With the 16 LTTE fronts banned Western countries cannot refuse to take action on the grounds that these entities have done no harm in their countries. Binding Western States where most of the LTTE diaspora are domiciled is the requirement for States to give one another ‘the greatest measure of assistance in connection with criminal investigations or criminal proceedings relating to the financing or support of terrorist acts, including assistance in obtaining evidence in their possession necessary for the proceedings”.

Another factor that Western nations would need to cooperate with Sri Lanka on is to institute immigration reforms through ‘effective border controls and controls on issuance of identity papers and travel documents, and through measures for preventing counterfeiting, forgery or fraudulent use of identity papers and travel documents”. Now the members of the LTTE Diaspora and their families must be really worried – they are facing a turf  that they had not faced earlier. With 424 individuals and organizations listed by the GOSL it is now upto the Government to press the Western nations to take action.

Every word in the Resolution is obligatory and binding. There is also a Counter-Terrorism Committee to monitor the implementation of Resolution 1373 which Sri Lanka can seek guidance from.