Diaspora should be helping Sri Lanka instead of complaining – Lord Naseby 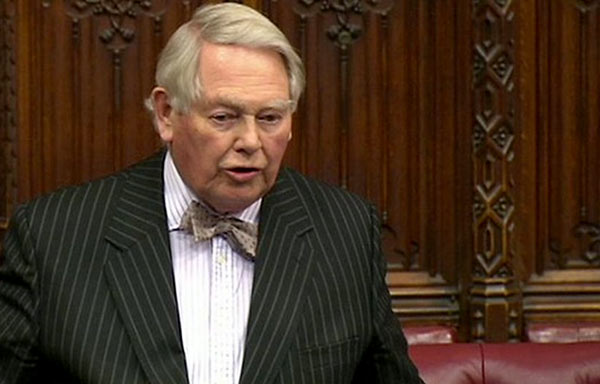 Lord Naseby of the House of Lords of the United Kingdom rubbishes the criticisms of the United Nations and other countries on the appointment of Lieutenant General Shavendra Silva as the Army Commander of Sri Lanka and says that it is none of their concerns.

Speaking exclusively to local TV program the former Deputy Speaker of the UK parliament and the President of All-Party UK-Sri Lanka Group Lord Michael Morris Naseby says that he will take up this matter with the Foreign Secretary of the UK as this is not a part of reconciliation and in fact undermines reconciliation.

Lord Naseby says that the way forward on the matter is to get the Office on Missing Persons (OMP) back on track as it is the ‘key that will unlock the door’, although it may take some time. Stating that he visited the OMP head who had told him that they did not have the necessary resources, Naseby says he is ‘quite frankly shocked’ that there are inadequate resources in that department. He states that the OMP needs resources to provide the investigators to track down the missing individuals and determine what had happened to them, whether they were actually killed or if they are ‘living and kicking’ in somewhere else in the world.

“We have some illegal immigrants in the UK. I’m sure there are some in Canada, I’m sure there are some in the USA and probably some in Australia who are allegedly missing but actually living and kicking somewhere else. Obviously, the work the OMP is doing is very thorough. But they need more resources to do [the work].”When inquired if the well-meaning Non-Governmental Organizations s and foreign organizations who are in the cause could fund the office, Naseby said, “You have got to remember that there still are LTTE supporters in Sri Lanka, the Diaspora, in certain parts of the UK. That is a problem in the sense that, we have elections and the political parties are sensitive to the Tamil vote.”

Speaking on the controversial UN report with allegations against Sri Lanka during its civil war, Lord Naseby says that it is extraordinary that the evidence supporting the report cannot be accessed until 20 years have passed. When inquired on the fact that Jasmine Sooka, part of the tri-member committee of the Darusman Report, says that 75,000 civilians were killed during the Sri Lankan civil war, Lord Naseby said, “It was quite wrong. This is a senior UN official peddling absolute lies. And I find that extraordinary. She knows the work I have done and the other parties have done. Well, she must know.

You had your very impartial senses. You had evidence from India. All of this comes down to a conclusion of maybe 5000, maybe 6000, no more. In a signed statement from one of the senior doctors, he thinks it’s only 2500. And Amnesty International, filming from space, they can see the indentations of where people were buried. That only shows 2000-2500. So we don’t know the exact number, that’s why the OMP is so important.”

Commenting on the reports of Colonel Gash, the then-British Defense Attaché in Colombo Naseby says that while Gash estimated the number civilians killed in the war to be 5000-6000, he had been amazed in one of his surprise visits to Trincomalee – where some of the IDPs who were wounded were taken – he was surprised by the care and the trouble the Sri Lankan Armies took to in caring for those who were injured and disadvantaged.

“And that indicated there never ever was any policy to kill civilians”, added Lord Naseby. Any government will have to work hard at all levels to ensure that there is no separation between the Tamil, Muslim, Christians and majority population Sinhalese, said Lord Naseby speaking on the way forward for Sri Lanka. Lord Naseby also spoke on the Easter Sunday terror attacks. Stating that the UK too has experiences and witness similar events, he said “We put our resources into intelligence. We have to make sure the police and the units are well briefed and well-financed. And they have to make the decision who has to be watched and who isn’t being watched.

And you have to face up to that. It’s a requirement. I’m not totally confident that that’s happening in Sri Lanka. It was happening when the war was going on. It doesn’t seem to me that it is happening at the depths it was before and you have to have that. Otherwise, it will happen again. ”The world needs to understand that Sri Lanka has been through long periods of difficulty and has made huge progress. In our end [UK], we have to get grip on the Diaspora. The Diaspora should be helping Sri Lanka instead of complaining about it. It is a responsibility of our nation [UK] to make sure that the Diaspora gets together and understands this Sri Lanka is their homeland, they have family here. And that Sri Lanka needs them to take interest in what is happening on the ground here and put some money and resources and efforts into it”, concluded Lord Naseby.