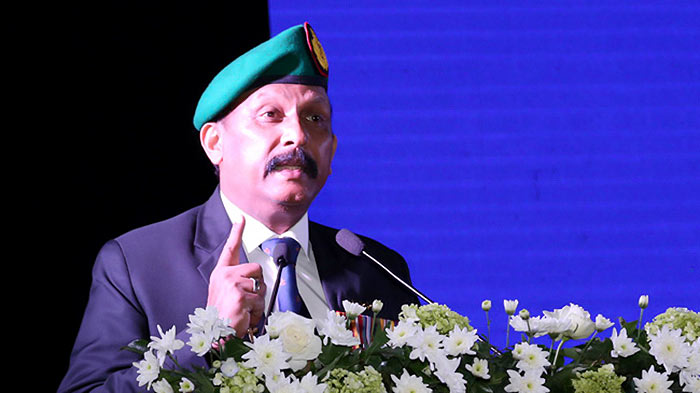 The grandeur and the prestige of ex-servicemen have to be reflected with the glory and the professional status they deserve, said Defence Secretary General (Retd) Kamal Gunaratne last evening (Feb 2).

“Taking the conception over the table with high-ranking ex-servicemen and the Tri-Forces Commanders, this exclusive dress code was designed”, he said while addressing the illustrious ex-servicemen of the Sri Lanka Ex-Servicemen’s Association (SLESA) at the Defence Services College Auditorium, Colombo.

General Gunaratne was the Chief Guest at the SLESA event organized to introduce an exclusive dress-code for the retired service personnel to be worn at the functions of national value and service oriented as well as at non-military functions organized by the civil establishments.

Next of kin of the fallen war heroes are entitled to wear the medals on the right-side chest along with the dresses stipulated.

Signifying the occasion, the Chief Guest, General Gunaratne was dressed at the inaugural session and all retired veterans also followed the dress-code.

Evoking the superlative military service rendered to the motherland, General Gunaratne went on saying “it wasn’t a cakewalk, but enormously challenging and inclusive with lots of hardships.”

He said “Such an enormous sacrifice was endured for the sake of the betterment of our mother nation.

“But the challenges are posing in various facets even today”, he added.

Recalling their involvements at war four decades back while expressing sentiments in equal footing of the former Tri-Forces Commanders those present at the event, he mentioned, “We were there at the forefront since the emergence of the ruthless terrorist activities in the island”.

“We come across the whole series of merciless activities of terrorists from the beginning to the end through decades”, he also noted.

“It was we who confined ourselves to barracks during the peace talks. Again it was we who endured the provoking activities of terrorists during the ceasefire in the same vein.

“It was we who confronted the dreadful assaults of terrorists once the ceasefire agreements were deliberately disturbed by them”, he said recalling “We saved innocent civilians who were under heavy attacks within war-torn border villages”.

The Defence Secretary stated, while transforming our armed forces to a victorious military, we got our land back while letting its citizens to freely breathe under one law and one flag.

“Differently-abled war veterans aren’t required any sympathy; nonetheless honour and pride they deserve has to be in persistence”, he said.

Reiterating that the military isn’t a criminal outfit, he said “Merely armed services are there to safeguard the country’s national security and that savoir-faire is still active in our blood”.

Rejoicing the pleasure of a novel dress-code announced, he said “It is a privilege to wear this beret even after the retirement, at special occasions” and he continued stating that “Having tendered the retirement as victorious military men, on completion of a meritorious service, the comradeship we cherished derives into mind, when wearing those medals and the beret”.

The SLESA President Maj. Gen. Upul Perera (Retd) enlightened the audience on the upcoming expansions and progress of the association, during his speech.