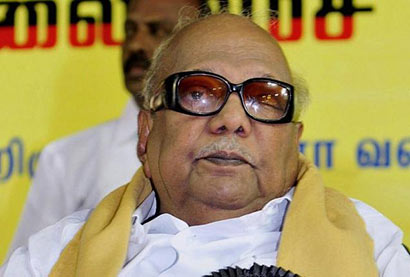 DMK president M. Karunanidhi on Saturday expressed his disappointment over the Centre’s silence on announcing its stand on the US-sponsored draft resolution against Sri Lankan in the United Nations Human Rights Council for its war crimes.

“The Centre is functioning as usual. That is why we are not saying anything openly,” he said when asked whether he was disappointed by its indifference.

On Friday he made it clear that his party’s continuance in the Congress-led UPA government would be meaningless if the Indian government failed to take steps to strengthen the draft resolution by incorporating provisions for an international independent inquiry into the genocide and brought to book those who were responsible for it.

When mediapersons met him on Saturday at Arivalayam, the party’s office, to know whether he had set any deadline for the Centre, he said “the deadline depends on the Centre’s response.”

Mr. Karunanidhi said his final expectation from the Centre was that it should take steps to bring in suitable amendments to the draft resolution to be moved by the US.

When asked why the Centre had not spelt out its stand even though AICC general secretary Ghulam Nabi Azad promised in the TESO meeting in Delhi that India’s stand would be guided by its earlier decision of voting against Sri Lanka in the UNHRC, Mr. Karunanidhi said his threat to leave the government would put adequate pressure on the Centre.

In a separate statement, he said the critics of the DMK forgot that fact that it was a regional party and sought to portray it as a superpower and create an impression that it could have stopped the genocide in Sri Lanka.

“When they want to blame the Centre they would describe it as a government in which the DMK is a partner. But they will never give credit to the DMK for the good deeds of the Centre. They are desperate to sideline the DMK,” he said.

Mr. Karunanidhi said he threatened to quit the UPA government since there was no proper answer from the Centre for his demand for India taking forward a resolution against Sri Lanka or support the US-sponsored resolution.

“Since we are part of the government we first express our stand on important issues. We request the Centre, then make a demand and put pressure. When there is no hope, we take a final stand. It is common in politics and the DMK has taken appropriate decision in the interest of Tamils. But those who cannot digest the DMK’s presence in the Centre may find these decisions strange,” he said. (Courtesy: The Hindu)