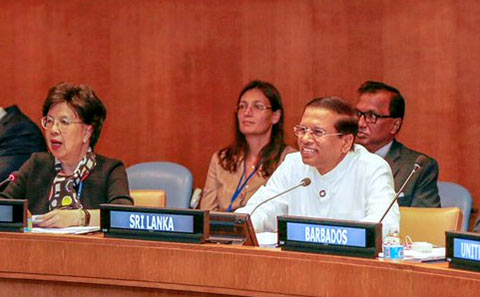 President Maithripala Sirisena said that the world leaders have commended Sri Lanka on the achievements of the last 18 months and that is a great incentive, encouragement and a blessing for Sri Lanka. He said this while briefing media on his discussions with several Heads of State and other leaders at the Loews Regency Hotel in New York.

He said that during the last UNGA too, he met these leaders, but they were more curious about the new government’s policies then. “Now they express open appreciation about our achievements,” he said. “I assured them that we, as a government, are determined to take the country towards progress and make Sri Lanka a truly democratic and prosperous nation,” he said.

The current respectful position of Sri Lanka is something the entire nation, irrespective of party politics could be proud of, Foreign Minister Mangala Samaraweera said, and added that the credit for this achievement goes to President Sirisena. Minister Mahinda Samarasinghe said that he had attended the UN sessions since 2002, and today he could see a remarkably favourable position towards Sri Lanka among the international community.

Minister Gayantha Karunathilake said that the world leaders have a tremendous respect for Sri Lanka because our President tells the world , whatever he tells the people at home, whereas previous leaders used to say something at home and a different thing when they are out of the country.