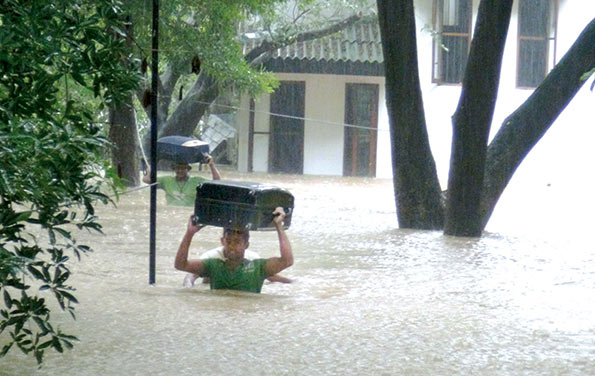 Around 19,916 persons belonging to 6,310 families in Jaffna, Mullaitivu, Killinochchi, Trincomalee, Puttalam and Gampaha districts have been affected by floods while around 2,600 persons have been displaced, Disaster Management Centre sources said

According to the sources 2,859 persons belonging to 841 families in Kopay,

One person died and another is reported missing due to floods in Karachchi, Killinochchi.

Around 27 houses in Mullaitivu and Kilinochchi districts have been completely damaged while 295 houses have been partially damaged.

The Meteorology Department duty forecaster said the highest rainfall was reported from Jaffna and at 166.6 mm.

“The low pressure area in the Bay of Bengal is still continuing and is now located to the northeast of Sri Lanka. Under the influence of the system, showery weather and cloudy skies over the country is expected to continue today.

“The possibility of strong winds over the country and surrounding sea area is still high,” he said.

Showers or thundershowers will be experienced over most part of the island, particularly in the northern half of the island. Very heavy falls (about 150 mm) are also likely at some places, the spokesman said.

There may be temporary localised strong winds during thundershowers.

The public is requested to take adequate precautions to minimise damages caused by lightning activity.