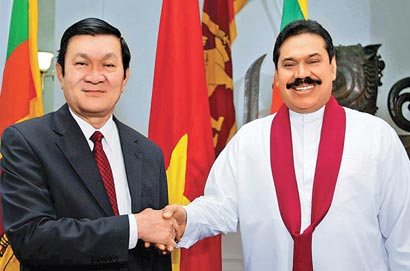 Vietnam will always stand by Sri Lanka in the international arena, stated Vietnamese President Truong Tan Sang during his bilateral discussion with President Mahinda Rajapaksa at the Presidential Secretariat yesterday.

He said Vietnam will always extend its assistance to Sri Lanka in the UN Assemblies, South-South corporation, Colombo Plan and any other international event.

Vietnam highly values the high level political relationship that exists between the two countries, the Vietnamese President stressed. He pledged to provide Sri Lanka with assistance in defence, defence training, fisheries, petroleum sector, disaster management, and search and rescue missions. Vietnamese multi-national corporations will be encouraged to invest in Sri Lanka, he noted.

Appreciating the Vietnamese President’s visit, the first-ever state visit by a Vietnamese leader to Sri Lanka, President Rajapaksa emphasized the close relations between the two countries which have “matured and strengthened on shared values and historical ties”.

He expressed his gratitude to the government of Vietnam for the support and co-operation extended to crackdown on illegal activities carried out by the LTTE in the East Asia Region.

“Although we have militarily defeated the LTTE, the sophisticated propaganda machinery supported by some INGOs, operating to tarnish the image of Sri Lanka is of great concern to us. I look forward to your consistent support in the regional and multilateral fora to counter such negative effects,” he said.

“Sri Lanka desires to strengthen defence cooperation between the two countries in fighting against the common menace of terrorism. In this context, the conclusion of the Defence Co-operation Agreement between our two countries during this visit would enable to initiate measures for practical cooperation,” he added.

Elaborating on trade and investment, President Rajapaksa said Sri Lanka seeks to engage with Vietnam to create a win-win situation for both countries, capitalizing on mutual advantages. He invited the Vietnamese business community to participate in the Expo 2012 Trade Exhibition in March next year.