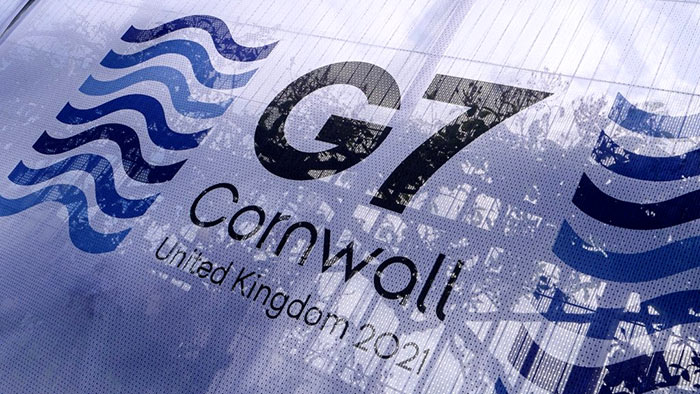 Leaders of the major industrial nations have pledged one billion COVID vaccine doses to poor countries as a “big step towards vaccinating the world”, Boris Johnson has said.

At the end of the G7 summit in Cornwall, the PM said countries were rejecting “nationalistic approaches”.

He said vaccinating the world would show the benefits of the G7’s democratic values.

There was also a pledge to wipe out their contribution to climate change.

After the first meeting of world leaders in two years, Mr Johnson said “the world was looking to us to reject some of the selfish, nationalistic approaches that marred the initial global response to the pandemic and to channel all our diplomatic, economic and scientific might to defeating COVID for good”.

He said the G7 leaders had pledged to supply the vaccines to poor countries either directly or through the World Health Organization’s Covax scheme – including 100 million from the UK.

The communique issued by the summit pledges to “end the pandemic and prepare for the future by driving an intensified international effort, starting immediately, to vaccinate the world by getting as many safe vaccines to as many people as possible as fast as possible”.

It also includes steps to tackle climate change, with leaders re-committing to the target of reaching net zero greenhouse gas emissions by 2050 at the latest and pledging to eliminate most coal power.

Mr Johnson rejected suggestions the vaccines pledge was a moral failure by the G7 as it was not enough to cover the needs of poorer countries.

He referred to the the UK’s involvement in the development of the Oxford-AstraZeneca vaccine.

“Already of the 1.5 billion vaccines that have been distributed around the world, I think that people in this country should be very proud that half a billion of them are as a result of the actions taken by the UK government in doing that deal with the Oxford scientists and AstraZeneca to distribute it at cost,” he said.

The target to vaccinate the world by the end of next year would be met “very largely thanks to the efforts of the countries who have come here today”, Mr Johnson said.

Mr Johnson also dismissed the suggestion that patents for vaccines should be waived in order to boost global supply, something which the US backed last month.

He said he wanted to protect “incentives for innovation” while building up manufacturing capacity, especially in Africa.

Elsewhere in their communique, G7 leaders also pledged to:

The communique calls for a “timely, transparent, expert-led, and science-based WHO-convened” investigation into the origins of COVID-19.

US President Joe Biden has previously said the US intelligence community is split on whether coronavirus came from human contact with an infected animal or from a lab accident – a theory rejected by China.

Mr Johnson said “the advice that we’ve had is it doesn’t look as though this particular disease of zoonotic origin came from a lab”, but he added: “Clearly anybody sensible would want to keep an open mind about that”.

French President Emmanuel Macron said the international community needed clarity about the origins of the virus but said it was up to the WHO to investigate.

With G7 countries accounting for 20% of carbon emissions, Mr Johnson said: “We were clear this weekend that action needs to start with us.”
But pressed on the lack of binding agreements and timetables, the prime minister says he will not “pretend our work is done” and he will be “on everybody’s case” to make further progress ahead of the COP26 summit in Scotland later this year.

Kirsty McNeill from Crack the Crises, a coalition of charities and NGOs including Save the Children and Oxfam, said the G7 summit was a “historic missed opportunity” on COVID-19 and climate change.

Leaders arrived “with good intentions but without their cheque books”, she said.

Joanna Rea, from Unicef UK, said the G7 pledge on vaccines was “the beginning of the action required to end this pandemic” but called for a “rapid acceleration of dose sharing in the next three months to ensure millions of vaccines get to the people in countries who need them the most”.