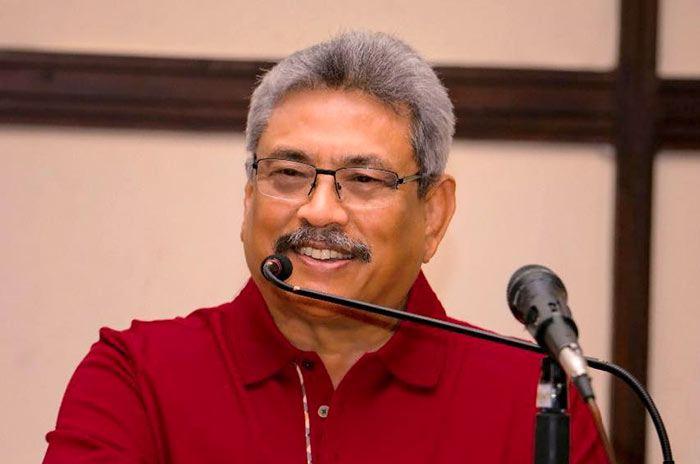 Wartime Defence Secretary Gotabhaya Rajapaksa on Saturday (Feb 23) alleged that the country was in dire straits today for want of political stability, consistency in respect of state policies, lack of transparency and weak decision making process.

had an opportunity to meet recently in Colombo expressed serious concern over the deteriorating situation here.

Rajapaksa said so at the launch of ‘Eliya’ programme in the Gampaha district. Having thanked the Gampaha District UPFA/JO/SLPP political leadership for extending its support for him, Rajapaksa explained as to why Sri Lanka couldn’t attract fresh significant foreign direct investments during the past four years.

Rajapaksa said that he reassured the foreign official that the Rajapaksa government had received Chinese funding for development purposes. Acknowledging that some powers had been upset over Chinese investments due to Sri Lanka’s strategic positioning, Rajapaksa said that he invited the official to consider investing here without being bothered by the China factor.

Rajapaksa said that not only foreign but local investors, too, were concerned about the continuing political turmoil in the absence of the government not having a simple majority in parliament. For want of a stable political environment Sri Lanka was continuing to lose foreign direct investments to other destinations, Rajapaksa said.

The former Defence Secretary emphasized the need for a strong government to ensure the implementation of vital policies.

Rajapaksa said Sri Lanka suffered due to change of policies even in the wake of a change of a minister responsible for a particular subject. Rajapaksa recalled how his brother former President Mahinda Rajapaksa remained committed to annihilation of the LTTE through military means once that decision was made.

Commenting on transparency, Rajapaksa said that if the previous government did wrong it couldn’t have achieved the desired results.

Referring to corruption charges in respect of allegations pertaining to the acquisition of MiG 27s by the previous government, Rajapaksa reiterated that the procedures were followed to the letter. Declaring that the MiG transaction could stand scrutiny, Rajapaksa said that the previous government endorsed Sri Lanka Air Force (SLAF) call for additional firepower by way of aircraft though the UNP (2001-2004) turned down the request.

Rajapaksa said that the UNP ignored the SLAF plea as it was engaged with the LTTE in terms of the Ceasefire Agreement (CFA).

Rajapaksa assured that the government followed procedures in the acquisition of arms, ammunition and equipment.

Rajapaksa alleged that since the change of government in Jan. 2015 nothing had been done to strengthen the national economy though grandiose plans were discussed and decisions taken.

Rajapaksa said that the Rajapaksa government acted swiftly and decisively and now they were in the process of preparing plans to address issues once the change of government took place.

The former Defence Secretary also referred to the significant role played by his brother Basil in these preparations. Gotabhaya Rajapaksa recalled the formation of the Sri Lanka Podujana Peramuna (SLPP) and the massive victory achieved at Feb 2018 Local Government polls Gotabaya Rajapaksa underscored the importance of the outcome of the Gampaha District vote at national elections.

1 Response to Gotabhaya underscores need for a stable government